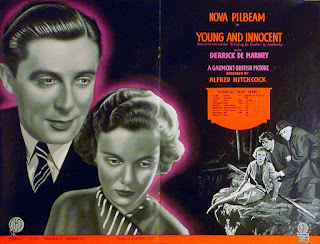 Young and Innocent was one of the series of great suspense films that Alfred Hitchcock made in Britain in the mid to late 1930s in which he established himself as one of the major creative talents in the world of motion pictures. The 39 Steps and The Lady Vanishes are recognised as masterpieces but Young and Innocent is still often, very unfairly, dismissed as Hitchcock Lite. In fact it’s one of the key movies of his career. All the classic Hitchcockian features are there and he’s in complete control of his craft.

A young man named Robert Tisdall (Derrick de Marney) finds a dead woman washed up on a beach. He runs off. Moments later two young women see the body, and they see Robert running off. The police arrive and decide that Robert is the obvious suspect. They don’t believe his story that he thought the woman might still be alive and was running to get help.

The dead woman is movie star Christine Clay. And Robert knew her. That will count against him. 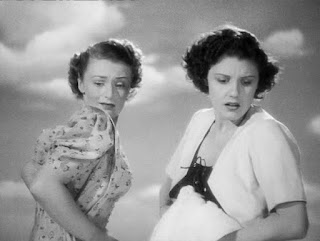 This is an early example of Hitchcock’s dislike of the police. In this instance the police are not malevolent. They are merely stupid, incompetent and lazy. With an obvious suspect in custody they are not interested in investigating the case properly.

The whole criminal justice system is farcically incompetent. Robert escapes from custody with contemptuous ease. Now he sets off to find a vital piece of evidence. On the road he encounters Erica Burgoyne (Nova Pilbeam) in her little motor car. She’s the Chief Constable’s daughter and he had already made her acquaintance while being questioned by the police. Now Erica has to decide whether to turn him in or help him. For various reasons she decides not to turn him in. Erica considers herself to be very good at identifying criminal types and she doesn’t think he looks like a murderer. She’s also kindhearted, the sort of girl likely to have more sympathy for the fox than for the hounds. Robert is also a good-looking charming young man which might have influenced her decision.

You also need to bear in mind the word young in the title. This is not just an attractive likeable couple on the run, they’re also young and rather naïve. Which of course makes us more sympathetic to them. Nova Pilbeam was just eighteen when this movie was made and we assume that her character is about that age. Her behaviour in the movie becomes completely plausible when we realise she’s a teenaged girl. Her whimsical romantic decision to help Robert becomes believable. She’s really not much more than a kid. We assume she’s probably never had a serious love affair before. When she finds that she’s rather attracted to Robert we can believe that she’s been carried away by a romantic fantasy. It’s the sort of adventure the heroine of a romance novel might have. Falling in love with an innocent man on the run! 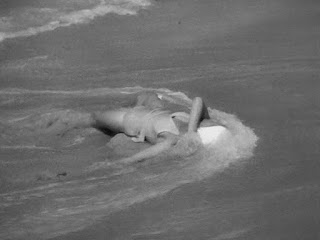 While Robert is a little older he’s only slightly more mature, or perhaps even just as immature. But we forgive them both.

It might sound like I’m dismissing Erica as a silly child but what makes her so engaging as a character is that she’s simultaneously intelligent and experienced, resourceful and naïve, sensible and impulsive.

I like the relationship between Robert and Erica. It’s playful and affectionate and rather tender but without being sentimental or insipid.

I like Nova Pilbeam a lot in this movie. She’s definitely not a Hitchcock Ice Blonde. She’s too warmhearted for that but she’s lively and amusing.

Maybe de Marney and Pilbeam don’t have the star quality of Robert Donat and Madeleine Carroll in The 39 Steps but they both have charm and they have extraordinary chemistry. You feel that Robert and Erica are just destined to fall in love. And this is a different type of couple on the run movie, it’s a more lighthearted movie with the emphasis more on the romance. 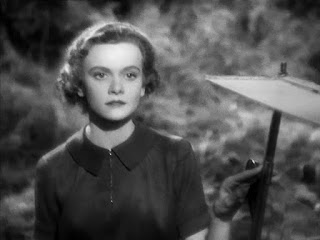 It could be objected that a weakness in the film is that there’s no initial antagonism between the two lead characters. It’s pretty much love at first sight. But that’s the sort of film this is. They’re like two children united against the adult world represented by Erica’s father. It’s not that her father is a bad man. He seems to be a loving and indulgent father but he represents the system of police and courts and laws that can destroy the lives of innocent people. He’s an authority figure and to Hitchcock authority figures are inherently suspect. Both Robert and Erica are somewhat child-like. They both have a childish faith that they will win out in the end because they’re young and in love.

Erica never wavers in her belief in Robert’s innocence. Again it could be objected that it would add dramatic tension if she had a few doubts but much of the enjoyment in this movie comes from the fact that it’s Erica and Robert vs the grown-up world.

The bond between Erica and Robert makes perfect sense. It’s established early on that she’s a sensitive girl who is horrified by violence. Her ideal man is clearly going to be Robert, who is unfailingly gentle towards her. And Robert wants a woman on whom he can shower affection, and he doesn’t mind at all that sometimes she mothers him. 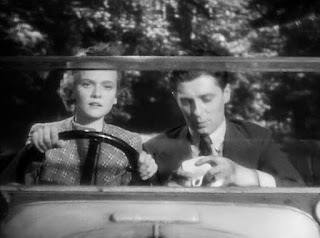 Hitchcock was already ware that he had to appeal to female audiences and this is to a considerable extent a women’s picture. It’s a female coming-of-age movie. At the start Erica is just a girl. She’s had a safe and comfortable but very narrow and very sheltered upbringing. She unquestioningly accepts her father’s view of the world - that the innocent have nothing to fear from the police, that she should accept her father’s authority, that she should obey all the social rules. She believes her father is always right. By the end of the movie she is a woman. She now knows that life is much more complicated, that the innocent do have reason to fear the police, that social rules don’t have to accepted without question, that life is full of shades of grey, that her father can be wrong, that she has to choose the man she wants. And she chooses a man very different from her father. She has, in a couple of days, grown up.

The alternative title, The Girl Was Young, makes it quite clear that the film is all about Erica. She is indeed young but she’s about to enter the adult world.

Young and Innocent was based on Josephine Tey’s novel A Shilling for Candles. Tey was a second-tier mystery novelist who is now quite highly thought of although personally I can’t imagine why. In any case, as with most Hitchcock adaptations, the movie differs markedly from the novel. Charles Bennett and Edwin Greenwood wrote the screenplay. 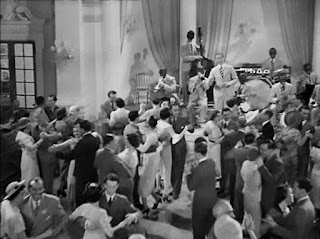 This is also both a “wrong man accused of a crime” story and “couple on the run” movie but, as I said earlier, it’s very much a coming-of-age movie.

The famous visual set-piece in this movie is the wonderful crane shot at the end but the slightly earlier set-piece in the old mine is in its own way just as dazzling and it’s refreshingly original. Hitchcock was already very confident of his ability to pull off these moments of visual brilliance. This is a movie made by a man who had already achieved an extraordinary mastery of the art of film-making. Everything works the way it should and everything works the way Hitchcock knew it would work.

Young and Innocent is a wonderful romantic adventure thriller. This is a genuine feelgood Hitchcock movie. Very highly recommended.
Posted by dfordoom at 2:02 AM