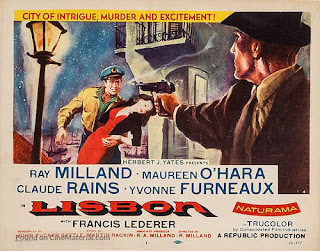 Lisbon was Ray Milland’s second picture as producer and director and he starred in the film as well. It was made by Republic Pictures and was shot in Republic’s budget version of Cinemascope and in colour. With an impressive cast and a lot of location shooting in Portugal this was a fairy ambitious production.

Aristides Mavros (Claude Rains) is a very rich and very successful businessman operating entirely on the wrong side of the law in Lisbon. In a clever opening sequence we learn everything we need to know about him - he is smooth, manipulative, ruthless and totally lacking in any sense of morality. He is also charming and intelligent.

Mavros is concerned about the activities of a rival smuggler, Captain Jack Evans (Ray Milland). He decides that he needs to find out a great deal more about Jack Evans so he offers him $10,000 to carry out a simple errand.

All Jack has to do is collect a package from an American woman when she arrives in Portugal. The woman is Sylvia Merrill (Maureen O’Hara). We discover that Mrs Merrill is in Portugal to try to get her husband back. Mr Merrill is a very wealthy businessman who is currently in prison in an Eastern Bloc country. Sylvia Merrill has tried to get the US State Department to help her but she has become impatient with their unsuccessful efforts. She has decided to pay Mavros a quarter of a million dollars to arrange for her husband’s escape.

Mavros proudly tells Sylvia that his family have been thieves for six generations. He is a thief, but he is a reliable thief.

Mrs Merrill really does want her husband back. Of course Mavros points out that if Mr Merrill were to meet with a fatal accident Mrs Merrill would then be a beautiful and very very rich widow. Sylvia Merrill is horrified by the suggestion. Such an idea had never occurred to her.

This movie proceeds in a somewhat leisurely manner but that’s necessary in order to make us aware of the conflicting motivations of the characters and the complicated situation in the Mavros household. Mavros has a secretary named Selwyn who carries out all the duties such a post requires. Mavros also has four other secretaries, all young and female. They don’t appear to have any actual duties at all. At least, no secretarial duties.

Mavros treats his employees with a mixture of generosity and whimsicality with some dashes of emotional manipulation and cruelty. He buys the four girls gorgeous dresses but if they misbehave he burns their favourite dresses.

Captain Evans has the job of picking up Sylvia Merrill’s husband, having been chosen for this task because his boat, the Orca, is fast enough to outrun any official vessels that might try to interfere. And at this stage we’re not quite sure which way any of the key characters is going to jump.

The exotic settings (the movie was shot entirely in Portugal) help a good deal. Milland handles the directing duties very capably although the pacing is just a little slow at times.

The acting is a major plus. Claude Rains has the plum rôle as the charmingly immoral Mavros and he makes the most of it. Ray Milland is an effective hero as Evans, a man who is a bit of a villain himself but who is not quite sure just how villainous he’s prepared to be. Maureen O’Hara is nicely ambiguous as Mrs Merrill. Yvonne Furneaux is, as usual, extremely good as the feisty eccentric and totally unpredictable Maria Madalena.

Kino Lorber’s DVD release (they’re released this one on Blu-Ray as well) looks pretty good and this is apparently the first time the movie has been available in a decent transfer in the correct aspect ratio. There’s an informative audio commentary by Toby Roan.

Lisbon is not a great movie by any means but it’s an entertaining low-key thriller with some very fine performances. It’s definitely recommended, especially for those who like their thrillers set in exotic locations.

Another pretty favourable view of this movie can be found at Riding the High Country.