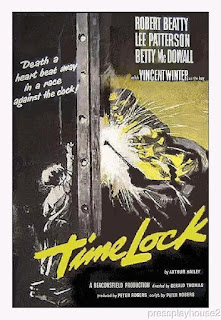 I have absolutely no idea how Time Lock came to be included in a film noir boxed set (it’s in Kino Lorber’s British Noir II set). This 1957 British thriller has no conceivable connection with film noir. It’s not even a crime thriller. The film noir label gets attached to all sorts of movies that have nothing to do with film noir but this may be the most spectacular case of mislabelling that I’ve ever come across.

That’s not to say that Time Lock is a bad movie. It’s just not a crime movie. It’s a “rescuers racing against time” thriller.

It’s Friday afternoon and the manager and chief accountant of the South York branch of the Crown Canada Bank in Toronto are closing up the vault. The accountant, Colin Walker (Lee Patterson) has just set the vault’s time lock. Just as they’re about to swing the door closed there is a car accident. While everybody is distracted Walker’s six-year-old son Stephen sneaks into the vault unnoticed. The door is swung shut before anybody realises the boy is inside.

And there’s no way to open the time lock. As Colin Walker explains, that’s the reason banks use time locks. They’re fool-proof. 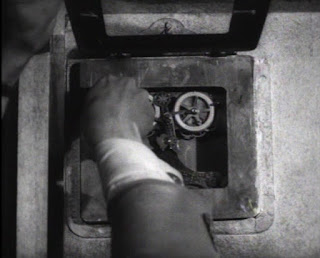 The time lock cannot be opened but if the boy is to be saved they’re going to have to open it.

The police have been called but they have no way to open the time lock either.

Until Pete Dawson can be found the only thing to do is to try to cut through the vault door with acetylene torches. The problem is that the vault was specifically designed to make it impossible to cut through the door. The door isn’t just steel, it’s steel backed by layers of other metals which apparently makes it all but impossible to burn though. 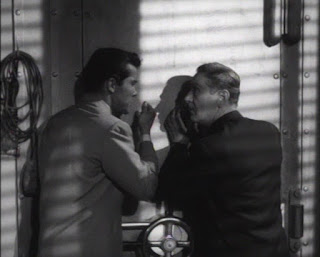 The other option is to go through the walls of the vault but the walls are composed of fourteen inches of reinforced concrete interspersed with four layers of steel bars. Again, the walls were designed to be impossible to break through. The vault is in fact impregnable.

There doesn’t seem to be any weakness in the design of the vault but if there is a weakness Pete Dawson will find it. But Pete Dawson has not yet been found.

This movie puts the parents of the boy, and the audience, through the emotional wringer. The people working feverishly to rescue young Stephen Walker have no idea if he is still alive, and the audience doesn’t know either. 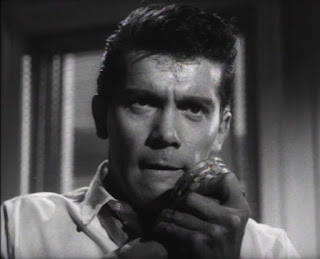 The drama has become a huge news story, with a huge crows gathered outside the bank and with countless people following the drama on the radio. That proves to be an advantage - the radio station is able to broadcast messages which makes it possible to assemble the equipment needed for the rescue bid, and volunteers are recruited from the crowd to work on breaking through the vault.

The acting reaches no great heights. Lee Patterson was a fine actor who could play villains or heroes or simply men caught up in nightmarish situations but he simply isn’t given anything to work with here. The characters are undeveloped. Which may perhaps have been intentional - it’s the race against time that matters here and too much focus on the characters would have been a distraction. Look out for Sean Connery in a small part.

The setup for this movie is vaguely reminiscent of Billy Wilder’s Ace in the Hole but the tone couldn’t be more different. Ace in the Hole is a deeply cynical misanthropic movie. The characters in Time Lock by contrast are all decent people doing their best. Even the radio reporter is genuinely anxious to help. The mood might be grim and tense as time runs out for the boy but Time Lock has a certain optimism about human nature. Whether the boy will be saved or not we don’t know but in this crisis people work together to at least try to save him. 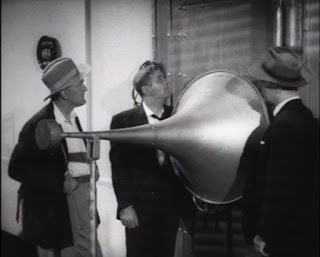 Director Gerald Thomas was best known for the Carry On movies but he was actually quite versatile. In the same year he directed Time Lock he directed the extremely good crime thriller The Vicious Circle (also included in this Kino Lorber set). In Time Lock he certain shows that he knew how to build tension. His brother Peter Thomas wrote the script, based on a play by Arthur Hailey (better known for his novels Airport and Hotel).

Kino Lorber’s transfer is excellent. The movie was shot in black-and-white in the 1.33:1 aspect ratio.

Time Lock is a very effective emotional suspense thriller with no crimes and no villains. It’s a low budget movie with only a couple of sets. It works because it’s so basic - the central idea is excellent and the movie is tightly focused on that one central idea. There’s no characterisation and no bravura acting performances to distract from what is a very simple but very effective plot. This is movie-making stripped down to the bare essentials. And it just works. All it has going for it is a good story, and that’s enough.  Highly recommended.
Posted by dfordoom at 1:48 PM