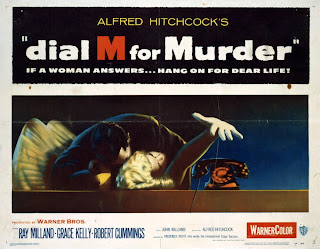 In the 1940s Hitchcock became obsessed by the idea of making a movie on a single set. I have no idea why since it involved the extreme danger that the resulting movie would be excessively stagey and excessively talky. And would be the complete antithesis of the pure cinema that Hitchcock wanted to create. I can only assume that he wanted to emphasise the artificiality of the medium. He made two attempt to put the idea into practice in the 40s with Lifeboat and Rope. Both were complete failures. In 1954 he tried again, with Dial M for Murder.

Hitchcock was also persuaded to make this movie in 3D. It only ever had a limited release in that format.

Tony Wendice (Ray Milland) is a recently retired tennis star who married Margot (Grace Kelly) for her money. The arrangement suited him perfectly. Until one day he discovered that she no longer loved him. More seriously, she had dealt with this situation by taking a lover. Her affair with American Mark Halliday (Robert Cummings) started to look rather serious and Tony realised that if she left him he’d be faced with the worst nightmare he could possibly imagine - he might have to get a job. The obvious solution from Tony’s point of view is to kill Margot. Then he’ll get her money. Problem solved. 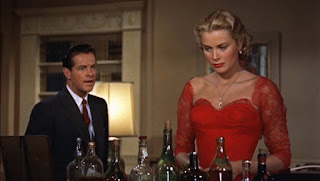 It all goes wrong. Rather than Swan killing Margot it ends with Margot killing Swan but the quick-thinking Tony comes up with a Plan B that is even more clever and ingenious - if Margot is hanged for Swan’s murder he will still inherit her money. She killed Swan in self-defence but he thinks he can make it look like murder.

So it’s a variation on one of Hitchcock’s favourite themes, the wrong man accused of a murder. In this case it’s a woman wrongly accused of murder. And since the woman is played by the glamorous and beautiful Grace Kelly the audience’s emotions are going to be fully engaged. No viewer of the movie wants to see Grace Kelly hanged. 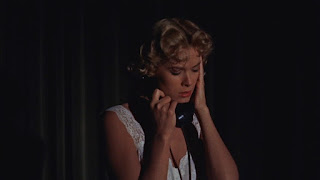 There’s plenty of suspense as time is running out for poor Margot.

The staginess of the movie means that, unusually for a Hitchcock movie, absolutely everything depends on the performance. In fact everything depends on one performance - Ray Milland’s. He more or less has to carry the entire movie single handed. Fortunately he’s equal to the challenge. Milland is sometimes dismissed as a kind of poor man’s Cary Grant but for my money Milland had by far the more interesting career, largely because (unlike Cary Grant) he was prepared to play both sympathetic and unsympathetic characters. He’s in superb form here. He really is quite chilling and at the same time charming and amusing. Milland was much much too old to be convincing as a recently retired tennis star but this is a detail we can overlook.

Grace Kelly doesn’t get all that much to do, apart from looking fabulous. It’s really more of a supporting part than a leading lady part. What she does she does well.

Anthony Dawson (as Swan) is fun as a stereotypical public schoolboy gone bad. John Williams is a delight as Chief Inspector Hubbard and Robert Cummings is dull as Mark Halliday.

But the movie belongs entirely to Ray Milland. 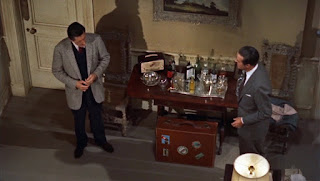 The setup of the movie doesn’t allow Hitchcock to indulge in any of his famous spectacular visual set-pieces. It’s the acting and the script that matter. This is one of the rare cases when we can say that given the script and the actors any competent director could have made this movie quite successfully. Of course they wouldn’t have made it quite as well. It doesn’t quite feel like a Hitchcock movie. If movies like Strangers on a Train and Rear Window and Vertigo were Hitchcock’s symphonies, full-blooded Hitchcock guaranteed to knock the audience’s collective sicks off, Dial M for Murder is like a piece of chamber music. It’s like a string quartet. It’s low-key and unassuming and it’s not a big movie but it’s perfectly constructed and it works.

It’s possibly also fair to say that after I Confess in 1953 Hitchcock wanted a surefire hit that would put him back at the top of the hit parade, especially given that he was intending to make more ambitious movies (and his next picture, Rear Window, was very ambitious indeed). It doesn’t hurt to remind the studios of your ability to make solid commercial movies. 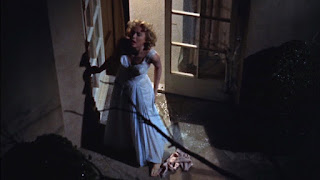 While Lifeboat and Rope failed Dial M for Murder succeeds because it’s not so extreme. It doesn’t use gimmickry to distract the audience. Hitchcock had a great story and he was content to focus on the plot.

And the plot really is very neat. With the kind of sting in the tail that Hitchcock enjoyed so much.

Dial M for Murder is just a very entertaining movie that you can just sit back and enjoy for pure pleasure. Highly recommended.
Posted by dfordoom at 7:24 AM