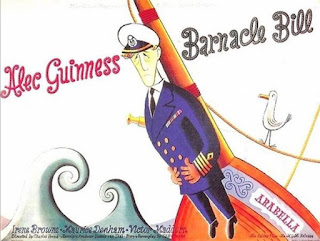 Barnacle Bill (AKA All At Sea) is a very late Ealing comedy starring Alec Guinness. It was directed by Charles Frend with a script by T.E.B. Clarke. Guinness apparently wasn’t pleased with it but it’s actually quite charming.

Guinness plays Captain William Horatio Ambrose, a man whose ancestors all had distinguished careers in the Royal Navy. Ambrose naturally joined the navy himself but then made an appalling discovery. He suffered from seasickness. He suffered so severely from seasickness that he was unable to go to sea at all. He spent the war in a shore posting (testing seasickness remedies for the Navy). He remained in the Navy after the war, reaching the rather high rank of Captain. But due to his disability he naturally never held a seagoing command. Having now retired from the service he has decided it is finally time for him to have his own command and he invests his life savings in his new ship. Only it isn’t a ship, it’s a rundown seaside amusement pier. But he can at least derive some vicarious enjoyment from the presence of the sea all around him. 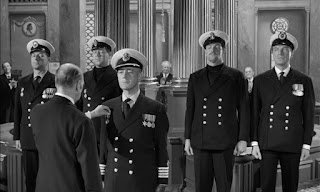 Captain Ambrose naturally decides to run the pier on strictly naval lines, much to the amusement of most of his employees (apart from Tommy, an ex-Navy man who is delighted to be appointed as First Officer).

Ambrose decides he’s going to live aboard the pier and he takes up residence in the Crazy Cottage.

Ambrose has plans to revitalise the pier but he runs into strong opposition from the corrupt and petty authoritarian local council. Ambrose is not dismayed. He has the Nelson spirit. He presses ahead with his plans, which lead to increasingly zany situations including an epic bloodless naval battle. 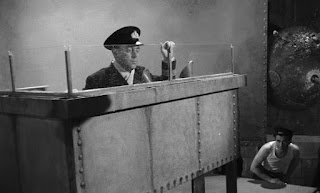 The town of Sandcastle is a rather dull place, mainly due to the fact that the council is as moralistic as it is corrupt. Fun is hard to find in Sandcastle. Ambrose intends to change that. He has plans for a dance hall and a bar. The young people of the town seem at first to be juvenile delinquents but actually they’re just bored. Captain Ambrose converts them from enemies into friends and allies.

Amrose could have been merely a ridiculous figure but he’s not played that way. He is actually a man of firm resolve and steely determination. Britannia did not rule the waves by surrendering to tyrants. Guinness manages to make Ambrose a very amusing figure but with genuine dignity. We laugh with Captain Ambrose, not at him. 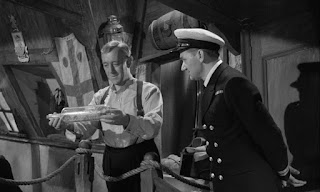 The supporting cast is more than adequate.

The pier itself is a star attraction, being gradually transformed from a seedy run-down semi-ruin to a kind of luxury cruise liner, albeit a stationary one.

This is in fact a very good-natured movie. Apart from the local councillors, who are a cowardly, pettifogging and money-grubbing lot, the characters are all played in much the same way - they are humorous but very likeable.

There’s a mix of verbal and physical humour and while it’s not always laugh-out-loud funny it is is consistently chuckle-inducing. It even has a message - never back down to petty tyrants and never give up. But the message is never laboured and the emphasis is on lighthearted amusement. 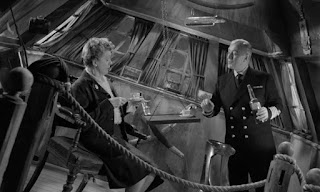 The problem with this movie is that you’re likely to be tempted to compare it to the truly great Ealing comedies. It isn’t quite in that league. It has a certain charm, it’s an amusing feelgood movie, it has some fine visual moments and it has Alec Guinness in fine fettle.

Kino Lorber have released this one on DVD paired with another nautical-themes Alec Guinness comedy, The Captain’s Paradise. There are no extras but for a reasonable price you get two movies and you get excellent transfers.

If you enjoy the 1950s style of British comedy then you’ll want to buy this set. And you’ll find Barnacle Bill rather delightful in its own low-key way. Recommended.