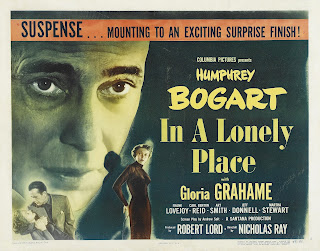 In a Lonely Place, released by Columbia in 1950, is a much-praised film noir directed by Nicholas Ray.

Now I have to put my cards on the table upfront. I am not a Nicholas Ray fan. I was however very impressed by In a Lonely Place when I first saw it sixteen years ago. How well does it stand up to a repeat viewing? We shall see.

Dixon “Dix” Steele (Humphrey Bogart) is a screenwriter. He’s also a self-pitying loser with a short temper and a bad attitude. His career as a screenwriter has been slowly going down the toilet. He thinks he’s far too important a writer to be sullying his hands on hack work, even though hack work is now all he can get. Now he has a chance to get his career back on track. All he has to do is to turn the latest bestseller potboiler into a usable script.

Being a writer with such a high opinion of his own talents he doesn’t want to demean himself by actually reading the novel he has to adapt. So he persuades hat check girl Mildred Atkinson (Martha Stewart), who has just read the book, to go back to his place and tell him the story of the book. It naturally crosses her mind that he has simply lured her back to his apartment in order to make an attempt on her virtue but in fact he really does just want her to explain the plot of the novel to him. His intentions are entirely innocent. The book sounds like the sort of thing that would make a hit movie so naturally Dix hates it. He then sends Mildred home in a cab. 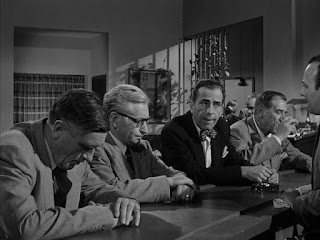 At five o’clock next morning the police come knocking and Dixon Steele finds himself a potential suspect in a murder investigation.

His neighbour Laurel Gray (Gloria Grahame) provides him with an alibi of sorts but the police still see Steele as their prime suspect. Captain Lochner thinks Dix did it because Dixon has a history of getting into bar fights. The fact that the kinds of guys who get into bar fights are not really the kinds of guys who commit this type of murder doesn’t seem to occur to him.

Dix and Laurel didn’t know each other at all. They were just neighbours who knew each other by sight. Now they find themselves thrown together and they fall in love, and Dix suddenly discovers he can write again. Everything would be going great, except that Dix has a murder rap hanging over his head and he keeps losing his temper.

Dix and Laurel become more and more romantically involved and the question of marriage arises. The police still think Dix is guilty. And Laurel has her doubts. It’s just a very vague suspicion at first but it keeps gnawing at her. 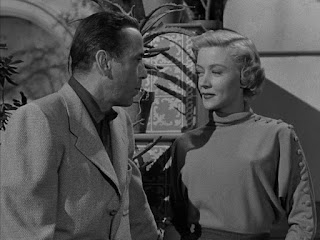 First things first. This is not a film noir. It has no film noir elements at all. Dix is not a classic noir protagonist. He’s just a pig and a jerk at the beginning of the picture and he doesn’t change. There’s no femme fatale. There are no flashbacks. There’s no noir visual style. There are a few night scenes but there’s nothing noirish about them. This is a melodrama. Usually I like melodramas so that’s not necessarily a problem, but a film noir it ain’t. It’s more Hitchcockian than film noir, with some thematic similarities to Suspicion.

The main problem is the character of Dixon Steele. He’s not just a pig and a jerk, he’s a whiny, self-pitying violent pig and a jerk. His friends keep making excuses for him but there’s nothing likeable or admirable about him. He’s selfish and self-centred. I suppose that because he’s a writer we’re supposed to see him as a tortured creative soul but really he doesn’t have enough redeeming qualities to make the viewer care very much what happens to him. Bogart makes Dix intermittently amusing but never sympathetic.

This means the movie has to rely entirely on Laurel - on her motivations, emotions and suspicions. It’s a complex part because Laurel is a woman who really doesn’t know herself what her true feelings are. She loves Dix and she should trust him, but she just can’t trust him no matter how hard she tries. Gloria Grahame’s performance is enough to save the film, but it’s still a film with some serious problems. 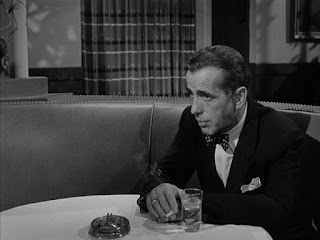 The movie is based on a novel of the same name by Dorothy B. Hughes but it had to go through a massive program of censoring and sanitising before Hollywood would touch it - ironically this practice of tearing the guts out of a story to make it safe and innocuous and cosy is just the sort of thing that would have driven Dixon Steele to start breaking heads and putting his fists through walls. So once again there are parallels to Hitchcock’s Suspicion, with Hollywood pusillanimity giving us soda pop instead of the raw Scotch of the original story. The response of the screenwriters of both Suspicion and In a Lonely Place was to abandon the original story entirely and instead offer quite different stories focused on ambiguity and suspicion. In both cases the central character is a woman in love with a man but she can’t love him fully because no matter how much she wants to believe he is innocent she has that nagging suspicion that he might be a killer. And in both cases the audience has the same nagging suspicions.

In Suspicion the central female character was in love with a man who had enough good qualities to make it entirely understandable that she would want to believe in his innocence. In a Lonely Place offers us no clue at all as to why Laurel would waste her time on a jerk like Dix. 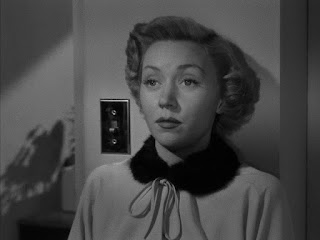 And once again we find ourselves back with the problem of Hollywood’s determination to treat its audience like small children. There is one crucial factor missing that would make the film’s plot and the characters’ motivations make sense and that factor is sex. But this was Hollywood in 1950 and movies had to pretend that female sexuality did not exist. Dix’s motivations and Laurel’s motivations could have been made perfectly plausible had the movie been able to confront the question of sex honestly and openly. The only possible explanation for Laurel’s obsessive attraction to Dix is that his rebelliousness and in particular his violence excites her sexually, but of course the movie cannot even hint at such a thing.

The movie is also stymied in any attempt to explain Dix’s personal problems. Is there a sexual element? Or is the key to his personality the war? If you give a man a gun and teach him to be a killer will he revert to normality once the war is over? There is one tantalising scene that suggests that Dix’s problem is that the war taught him to automatically respond to any crisis with violence.

So what we have is definitely not a film noir but a Hitchcockian psychological suspense thriller that almost works but is only a partial success because the keys to the story, the motivations of the two lead characters, are just not quite convincing enough. It does however almost work and the ending does work extremely well. It’s an attempt to make a complex film dealing with complex emotions but Hollywood was still not prepared to treat its audience as grown-ups. 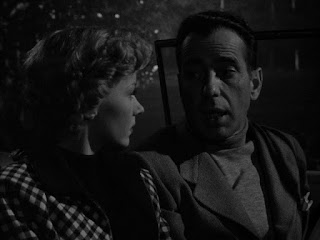 The ending of the film (which was not the original intended ending) provides more parallels to Hitchcock’s Suspicion and in both cases I’m inclined to think that the ending finally chosen was the best compromise possible at the time. The script went through drastic changes before filming began, in fact the earlier versions would have made a totally different film. It’s a worrying indication that nobody involved in the project had any clear idea of what kind of film they wanted to make or how they wanted to make it or what the characters were supposed to be all about. It’s likely that studio timidity and worries about the Production Code were responsible for the script chaos and for the fact that the finished film feels like an uneasy compromise.

A lot of the ambiguity which is admired in this movie may be nothing more than plot incoherence, an inevitable result with a script that was radically recast several times. There are important elements that just go nowhere. Early on it is made clear that much of Dix’s bitterness and violence are consequence of his Creative Struggle. He wants to be a Real Writer but his employers at the studio want him to churn out commercial pap. His latest assignment is to churn out a popular potboiler and this causes him intense Artistic Suffering. Dix’s friends justify his bad behaviour on this basis (as does Dix himself). He does complete the screenplay. But did he compromise his Artistic Principles or did he sell out? It seems vital that we know, but we’re not told. It’s as if this element has simply been forgotten, even though in the early stages it was established as one of the major themes of the film.

The Criterion DVD (they’ve released it on Blu-Ray as well) includes lots of extras. There’s an audio commentary by Dana Polan which is definitely best avoided. He’s obsessed with over-analysing every single frame of the movie, to the extent that he misses the big picture. Occasionally he’ll thrown in a snippet that is genuinely important and worth discussing but he doesn’t discuss it. He just goes back to his trite over-analysis of individual shots. The extras are bizarre

In a Lonely Place strikes me as a potentially great psycho-sexual thriller that was watered down into a reasonably competent suspense thriller. It’s an example of the same commercial compromises that Dix spends the whole movie wailing about. It’s still an interesting movie but I’m much less impressed the second time around and my opinion of Nicholas Ray as a film-maker declines with every Ray film that I see.
Posted by dfordoom at 5:08 AM