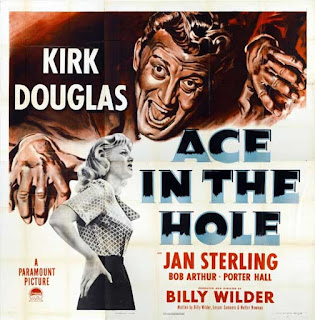 Ace in the Hole is Billy Wilder at his most vitriolic and misanthropic. It’s as subtle as a sledgehammer to the jaw but it undeniably works. Made at Paramount in 1951, this is a full-scale frontal assault on the press. While there is technically no actual crime committed in a legal sense, or at least nothing that could easily be proved in court, there is most certainly a very serious moral crime. And the central character follows the classic film noir trajectory, making this movie (like Wilder’s Sunset Boulevard made a year earlier) an unconventional but very definite film noir.

Chuck Tatum (Kirk Douglas) was once a high-flying big city reporter. After being fired from no less than eleven newspapers, for offences ranging from drunkenness to seducing the proprietor’s wife, he arrives in New Mexico penniless. He talks his way into a job with the Albuquerque Sun-Bulletin. For a man who was once a star reporter it’s a very humble job indeed but he figures that a story will come along soon enough that he will be able to exploit to propel himself back into the big time. He hates everything about New Mexico. Central Park in New York is as close as he ever wants to get to the great outdoors. 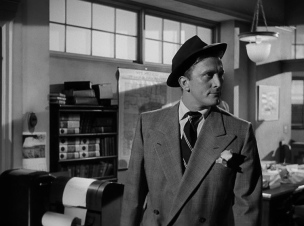 A year later he is still waiting for that lucky break. And finally he gets it. Leo Minosa (Richard Benedict) runs a gas station and diner in the middle of nowhere. Nearby is an ancient Indian village and burial ground, the burial ground being located in a series of deep caves in the cliff face. While looking for Indian relics to sell at his two-bit roadside diner Leo manages to get himself buried in a cave-in. Leo is still alive but his legs are trapped under a huge pile of boulders and any sudden movement could bring the whole cave system crashing down upon him.

Chuck Tatum knows an opportunity when he sees one. He and a young photographer from the Sun-Bulletin, Herbie Cook (Robert Arthur), just happen to be on the scene. Chuck takes charge immediately. He intends to be in total control of the situation. This could be a very big nation-wide story and Chuck is going to make sure that he is the reporter who gets the exclusive stories. Assuming that the rescue operation will take a week or so, that’s a week of front-page stories and Chuck will have every newspaper in the country begging for his services. To ensure that no other reporters can get inside access to the story he makes a sleazy deal with Sheriff Gus Kretzer (Ray Teal). 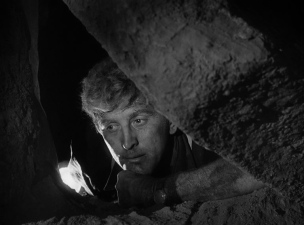 In a week Chuck will be writing his own contract with the biggest of the New York dailies and Sheriff Kretzer will be guaranteed of re-election. The only problem is that the rescue operation is not going to take a week. It’s only going to take sixteen hours or so. Chuck and Sheriff Kretzer make sure that it will actually take a week. Sure it’s a pretty low thing to do, to keep a guy trapped in a cave for a week when he could be out within a few hours, but moral problems like that have never bothered Chuck Tatum. He’s going to get his big story, whatever he has to do to get it.

Within a few days the scene has become a media circus and thousands of sight-seers have converged on Leo Minosa’s diner. The money is rolling in for Leo’s wife Lorraine (Jan Sterling) who intends to get as far away from New Mexico and Leo as she can, as soon as she’s made enough money to set her up. Chuck Tatum, the sheriff and Lorraine are all doing very nicely out of Leo’s predicament, but Chuck will find that events have a nasty way of getting out of control and the unexpected always happens at the worst possible moment. 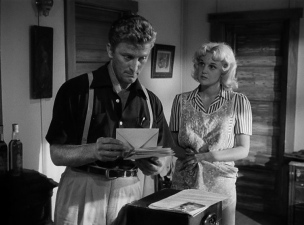 This movie’s status as a film noir rests entirely on its content, having none of the classic film noir visual signatures. But the content should be noir enough to satisfy any reasonable person.

I’ve never had much time for Kirk Douglas as an actor but this role suits him perfectly. His scenery-chewing histrionics are just what Wilder wants for this movie. Jan Sterling does well as Leo’s wife, a woman who is in her own way as cynical as Chuck Tatum. Lorraine is not a classic femme fatale and Sterling doesn’t play her that way but she has enough cynicism and enough desperation to make her a very noir character.

Ray Neal as Kretzer is the sort of sheriff that city people like Billy Wilder like to imagine all rural sheriffs are - corrupt, petty and vicious. He’s a mere two-dimensional stereotype but Neal does the job effectively. The various minor characters are all either corrupt or morally weak or stupid. Wilder doesn’t make any distinctions - he just hates everybody. 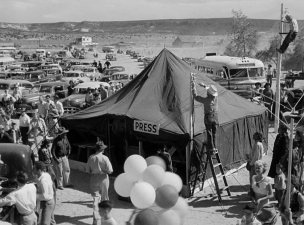 Wilder co-wrote the screenplay and it’s a savage kick to the head. What it lacks in subtlety it makes up for in intensity and nervous energy. Wilder certainly knew how to hate and this script is positively dripping with loathing. His intention was clearly to do to the newspaper business exactly what he had done to Hollywood with Sunset Boulevard and it could be argued that Ace in the Hole is even more successful in the sense that the newspaper game is even more deserving of this sort of scathing treatment. Chuck Tatum is not evil; he simply has the moral sense of a rattlesnake.

The Region 4 DVD is barebones but offers a very good transfer. The movie is in the correct 4:3 aspect ratio and the black-and-white picture is sharp with excellent contrast.

Ace in the Hole is too crude to be considered a great picture but it’s certainly entertaining in a spiteful sort of way. Recommended.
Posted by dfordoom at 7:33 PM