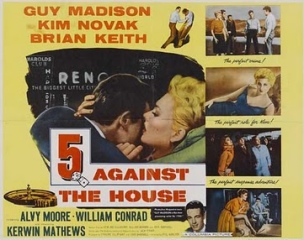 5 Against the House was released by Columbia in 1955 and it seems to be accepted as a film noir largely because it was directed by Phil Karlson, who made so many fine noir movies.

Al (Guy Madison), Brick (Brian Keith, Roy (Alvy Moore) and Ronnie (Kerwin Mathews) are Korean War veterans attending Midwestern University under the GI Bill. Al is engaged to Kay Greylek (Kim Novak), a nightclub singer. Brick saved Al’s life in Korea, but Brick has never recovered from the war. He’s a walking time bomb. Early on in the movie we see him almost kill a guy over a woman.

Al is not a complete fool. He knows that Brick is a psycho case but since Brick saved his life he feels responsible for him. Al had been an officer so he feels a double responsibility as both an officer and a friend. He thinks he can keep Brick out of trouble although so far he’s had mixed success in this endeavour. 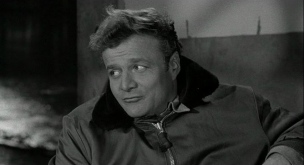 During the summer break the four friends head to Reno. At a big gambling joint called Harold’s (a western-themed casino) they overhear a chance remark by a cop that robbing Harold’s would be completely impossible - the security is tighter than Fort Knox. Ronnie takes that as a challenge - nothing can be impossible.

Ronnie comes up with a fool-proof plan to rob Harold’s. Not that Ronnie has any interest in being a criminal. His parents are rich and he’s doing well at college. He regards it all as a harmless prank. They will steal a million dollars from Harold’s and then give the money back. No-one will get hurt and since they are going to give the money back they won’t really be committing a crime. They can hardly be arrested if they don’t keep the money. That’s Ronnie’s theory anyway, and he convinces Roy and Brick that it’s a swell idea. College students have never been renowned for their common sense, even those who are in their 30s and should know better. 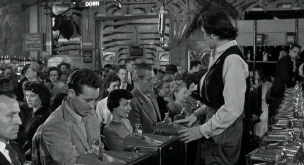 The problem is that the plan requires four guys. That means they need Al. Al is much too sensible to have anything to do with such a hare-brained prank but Brick assures Ronnie that once they’re on the road to Reno again he will talk him around.

While Ronnie is planning the perfect crime Al and Kay are having relationship problems. Incredibly time-consuming relationship problems that pretty much chew up the whole of the first half of the movie and make this one of the slowest moving heist movies ever made. Al and Kay just never stop discussing their possible future marriage. Finally, after forty minutes of mind-numbing tedium, the actual plot starts to kick in. Even when it does kick in it still has to stop from time to time so Al and Kay can discuss their relationship problems for the ten thousandth time. 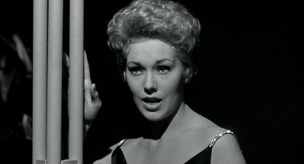 When we do finally (and mercifully) get to the heist it’s reasonably clever and moderately exciting. While Ronnie and Roy still think it’s a harmless college prank and Al and Kay (who has come along for the ride so that she and Al can discuss their deeply fascinating relationship problems) have no idea what is being planned things have been happening inside Brick’s brain. The truth is that Brick is a screw-up and always has been a screw-up. The only thing he was ever good at was being a soldier and he wasn’t even any good at that, ending up in the psycho ward at a military hospital. Brick knows he’s never going to graduate and he’s never going to be a lawyer and that the rest of his life will be a never-ending saga of angst and self-pity. Ronnie’s prank robbery is his one big chance of success. Brick is a classic noir loser, although he’s even dumber than the average noir loser.

Al is kind of a noir hero as well in the sense that his misguided sense of loyalty to Brick gets him involved in a real robbery in which real people, including himself, could get killed.

The focus is not so much on the heist as on the personalities of the vets, in particular Al and Brick, and the problems they face adjusting to normal life after their experiences in Korea. This might be in some respects a film noir but it’s also one of those 1950s angst movies. In fact it’s perilously close at times to falling into that most tedious of all movie categories, the Social Problem Movie. 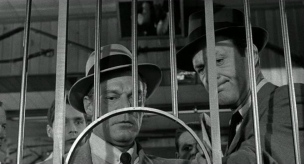 Guy Madison as Al is adequate if rather bland. Kim Novak is quite good as Kay - it’s not her fault that the screenplay by Stirling Silliphant and William Bowers gets bogged down in Al and Kay’s profoundly uninteresting marital dilemmas. Alvy Moore as Roy is an irrelevant but harmless comic relief character. Ronnie is potentially the most interesting character. If he really intends the whole thing as a prank why does he become so obsessed by it, even to the extent of spending a good deal of his own money on the preparations and risking his friends’ lives? Sadly Ronnie’s issues never do get explored and Kerwin Mathews isn’t given the chance to display his acting chops.

The central character is Brick and Brian Keith does a reasonable job. Brick is a walking disaster and it might have been interesting to find out exactly where and how he became such a mess. This was the mid-50s, a time when Hollywood was getting very excited by psychiatry, and the movie accepts the standard psychiatric view that no-one is responsible for their own actions. We’re all just children and we need to rely on psychiatrists to tell us how to live. The best thing for Brick would be to go back to the hospital and spend the rest of his life as a big baby in a nice safe padded cell.

Phil Karlson was usually a very reliable director of this type of movie but this time he gets bogged down quite badly and the movie never generates any real excitement. This may well be his worst movie.

This is one of the five movies in the Columbia Film Noir Classics I boxed set. It’s a nice anamorphic transfer (the movie was shot in widescreen) but there are no extras apart from a trailer.

5 Against the House is really a bit of a yawn and cannot seriously be recommended.
Posted by dfordoom at 9:07 AM