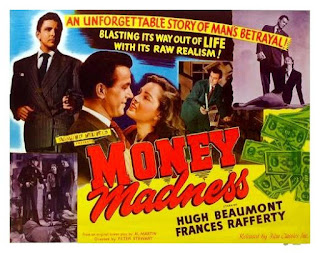 Money Madness is a forgotten 1948 B-movie from Sigmund Neufeld Productions. It’s an interesting example of a reverse noir. By that I mean that the noir hero role is taken by a woman with a man playing the role usually expected of a femme fatale, becoming a sort of homme fatale.

The story, in time-honoured noir style, is told entirely in flashback. Julie (Frances Rafferty) lives with her elderly and very demanding aunt. Aunt Cora is something of a nightmare but Julie is the only family she has. Julie resents her aunt but she can’t bring herself to walk out on her. She knows that Aunt Cora is lonely and unhappy and that that’s the reason for her constant neediness. If only Aunt Cora would be just a little bit more understanding of Julie’s need to get out occasionally. 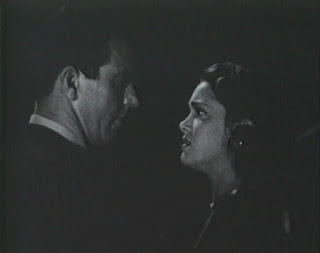 Then comes a fateful meeting. Julie has been out on a date with a creepy drunk who won’t take no for an answer. She is rescued from this predicament by cab driver Steve Clark (Hugh Beaumont). Steve seems like a really nice guy, so different from most other men. Steve really is different from most other men, but not in the way Julie thinks. In fact he’s a bank robber with $200,000 sitting in a safety deposit box. Steve has cooked up an ingenious plan. Most crooks get caught when they start spending the money they’ve stolen. Their problem is that they can’t find a way to make their ill-gotten gains look legitimate. Steve’s plan takes care of that problem. He will marry Julie and then hide the money in Aunt Cora’s house. When Aunt Cora dies he and Julie will pretend to find the money hidden in a trunk. Since Aunt Cora is just the kind of eccentric old person who might have large sums of money stashed away in unlikely places there should be no difficulty in getting people to believe their story. And Julie is Aunt Cora’s heir so the money will then be hers, Or rather it will belong to her and her husband.

Of course there is one potential obstacle. What if Aunt Cora doesn’t die? Steve has a answer to that as well. 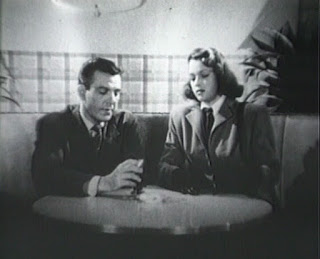 Julie is horrified when she discovers what her new husband has been up to. Her first instinct is to go straight to the police, but Steve convinces her that she has now made herself an accessory, and besides a wife can’t testify against her husband. This is a classic example of an irritating flaw that crops up time and time again in crime movies. If Julie went to the police she’d have no difficulty in persuading them to believe her story and the very fact that she was coming forward would convince them that she was never anything but an unwilling dupe. But if Julie did the sort of sensible thing that any sane person would do we’d have no movie. So Julie doesn’t go to the police.

Of course Steve’s plan does hit a couple of very nasty snags and meanwhile Julie is being dragged more and more into his crazed criminal scheming. It’s all going to end in tears but Julie, again like the typical noir hero, seems unable to break out of the net. She has adopted the characteristic noir fatalism that has doomed so many noir heroes. 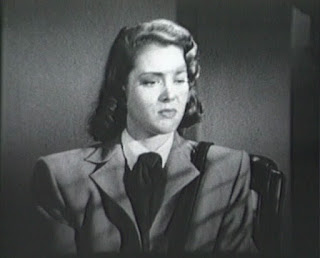 Steve Clark is of course quite mad. He’s so crazy that it never occurs to him that he might not get away with it. Hugh Beaumont gives a wonderfully chilling performance that is the one thing that makes an otherwise routine B noir into a minor noir classic.

Frances Rafferty is reasonably good as well. Julie has been ensnared the way so many male noir protagonists have been ensnared. She has fallen for a good-looking charming man who turns out to be no good, and worse than that he turns out to be dangerously and scarily psychotic.

Aside from Beaumont’s bravura performance this is a competently made well-paced B-movie that has no difficulty in keeping the viewer’s interest throughout its modest 73-minute running time. 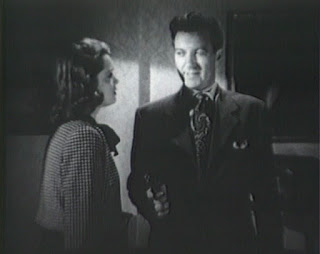 Alpha Video’s DVD release is exactly what you expect from this company. The picture is dark and murky, contrast is extremely poor, there’s a lot of graininess and there’s some print damage. On the other hand it’s cheap and it’s the only way you’re ever likely to see this movie.

And Money Madness is definitely worth seeing. It’s an above-average and highly entertaining B-movie with genuine film noir credentials. Despite the indifferent quality of the DVD this one is worth buying. Highly recommended.
Posted by dfordoom at 6:16 PM