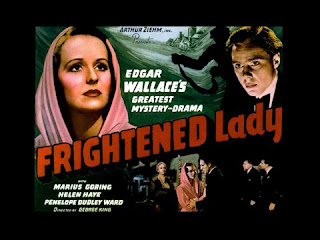 The Case of the Frightened Lady (also released under the shortened title of The Frightened Lady) is an Edgar Wallace adaptation released by British Lion Films in 1940. It’s pretty hard to go wrong with Edgar Wallace. His stories adapt remarkably well to film or television, and this particular movie hits all the right notes.

Lord Lebanon (Marius Goring) is the last of his line. His family goes back a thousand years or so, to before the Conquest. Not surprisingly he feels himself to be under a lot of pressure to marry and produce an heir and his mother does nothing to lessen that pressure. The dowager Lady Lebanon (Helen Haye) is very big indeed on family and tradition. She was herself a member of the family even before her marriage, being a direct descendant of the fourth baron and therefore a distant cousin to her husband.

Lady Lebanon’s young secretary Isla Crane (Penelope Dudey-Ward) is another distant cousin. She has no money of her own but the fact that she is of the blood is what matters to Lady Lebanon. Lady Lebanon hopes to persuade her son to marry Isla.

The young Lord Lebanon carries out his duties as well as he can.  His forebears may have been doughty warriors but he would really much rather be a jazz musician. 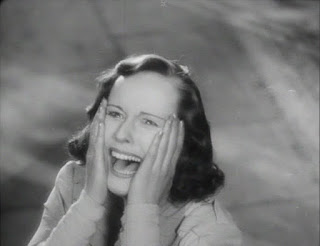 Isla is the frightened lady of the title. But what is it that is frightening her? Partly it seems to be two of the footmen. Gilder (Roy Emerton) and Brooks (George Hayes) don’t really behave like footmen. They don’t really behave like servants at all. They look more like ex-prizefighters and they seem very much out of place in Monk’s Priory, the ancient residence of the Lebanon family.

Isla also seems somewhat frightened of the mysterious Dr Amersham (Felix Aylmer). Where Dr Amersham fits in is not at all clear. In fact nothing is very clear about Dr Amersham, except that he had been in India and that the Lebanon family chauffeur Studd (John Warwick) knew him in India and more to the point knows something that Dr Amersham is very keen not to have revealed. 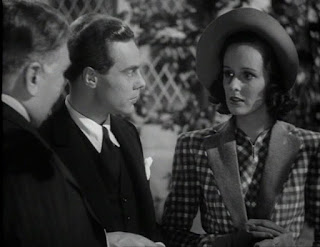 Also on the scene is a young architect named Richard Ferraby (Patrick Barr), employed by Lady Lebanon to do some much-needed restoration work at Monk’s Priory. Ferraby and Isla take a liking to each other, something that Lady Lebanon most certainly does not approve of.

During a charity ball Studd is murdered - strangled by an Indian silk scarf. The obvious suspect is the gamekeeper Tilling (Torin Thatcher). Detective Chief Inspector Tanner (George Merritt) is not convinced that Tilling was the murderer. He is sure that there is a great deal going on at the Lebanon residence that he would like to know about before attempting to solve this murder. 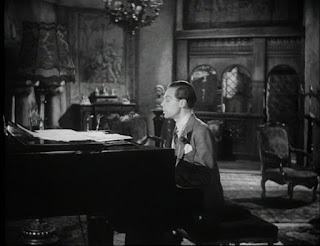 As with any Edgar Wallace story there will be much more mayhem to come.

Wallace’s stories work best on the screen when they’re not taken too seriously and when the actors are given the chance to do some serious scenery-chewing. Both Marius Goring and Felix Aylmer (one of my favourite character actors) are willing to oblige and the results are most satisfactory. Helen Haye also goes well over the top as Lady Lebanon, with similarly pleasing results. George Merritt makes a good policeman who is smarter than he appears to be.

It seems to be a rule in Edgar Wallace adaptations that comedy relief must be provided by a junior Scotland Yard officer, in this case Detective-Sergeant Totty (Ronald Shiner). The comic relief is not needed and the movie would be more fun without him but thankfully he does not succeed in ruining the movie. 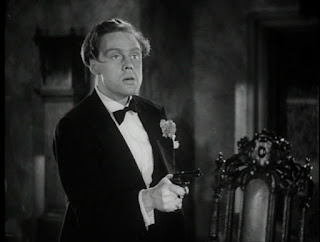 George King directed several of the wonderful Tod Slaughter melodramas of the 30s and he therefore knows exactly how to handle this kind of material. He captures the right atmosphere and is helped considerably by some very good sets that lend themselves well to mysterious shadows, creaking staircases, hidden rooms and secret passageways.

Odeon’s Region 2 DVD includes no extras apart from numerous trailers for other films in their Best of British DVD series. The transfer is excellent.

The Case of the Frightened Lady is fine entertainment. The 1940s and 1950s would be a golden age of British thrillers and this movie is a worthy if perhaps not quite outstanding member of that honourable pantheon. Recommended.
Posted by dfordoom at 12:58 AM