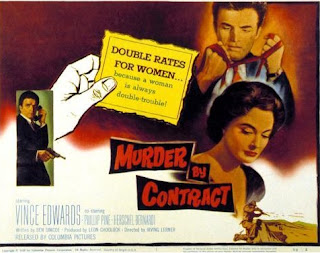 Many books on the subject will tell you that film noir was all but dead by the mid-50s and that Orson Welles’ Touch of Evil represented noir’s last gasp. That hasn’t stopped various corporations from releasing a lot of late 50s movies on DVD under the noir banner in recent years. Some of these movies are at best only marginally noir but many are nonetheless quite interesting. Murder by Contract, released by Columbia in 1958 and included in the Columbia Film Noir Classics I boxed set, is a pertinent example and it’s a very interesting film indeed.

Claude (Vince Edwards) has a good steady job but he’s a young man in a hurry. If he waits he will get the things he wants but he doesn’t want to wait and he think that guys who are prepared to wait are suckers. Vince isn’t going to be that kind of sucker. He’s going to have what he wants now. So he makes a career change. He decides to become a hitman.

At first he does pretty well. He gains a reputation as something of an eccentric - he dislikes having anything to do with guns. But he also gains a reputation for success. Claude is a careful planner and he takes an innovative and imaginative approach to the job. 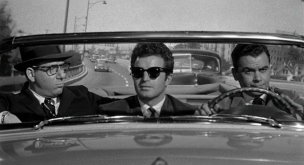 Then comes the Williams job. If Claude had been told the details he would never have accepted to contract. The target is a woman and Claude isn’t happy about that. It should be noted that his unhappiness about the job has nothing to do with chivalry. Claude considers women to be too unpredictable. To carry out a contract you have to get to know the target’s habits, you have to be able to anticipate their actions, and that’s much too difficult with women.

In fact Claude has a decidedly odd attitude towards women. He dislikes them because he doesn’t understand them. Claude is an orderly man and women offend his sense of order.

The Williams job takes Claude to LA. His contacts there are George (Herschel Bernardi) and Marc (Phillip Pine). Billie Williams is a nightclub singer who had been the girlfriend of a top mobster and now she’s been persuaded to testify against him. Her testimony promises to be devastating which is why she’s had a contract taken out on her. George and Marc are key henchmen of the gangster in question and if he goes down they go down, so they have a personal interest in this contract. 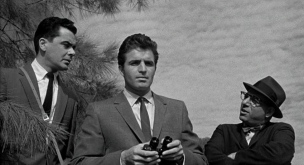 George and Marc are mystified by Claude’s leisurely and eccentric approach to the hit. Since Claude likes to take his time and since George and Marc are not going to let him out of their sight until the job is completed these three men will get to know each other rather well, and while they’re getting to know each other the audience is getting to know a great deal about all three. Marc doesn’t really trust Claude right from the beginning. He thinks he’s a screwball. George is inclined to agree about this but he is also inclined to believe that Claude is a genius. The uneasy relationship between these three men becomes one of the key elements in this movie.

The tone of the movie is somewhat odd. At times it seems to veer ever so slightly into the realm of black comedy with an existentialist flavour to it. At times it also seems to have a certain absurdist quality to it. It’s all done with admirable understatement but these elements seem to me to be clearly there. A modern film-maker would have bludgeoned the audience with these things but director Irving Lerner and screenwriter Ben Simcoe prefer to rely on subtlety. In fact there is so much in his movie that would have been ruined by the more obvious approach in vogue today. 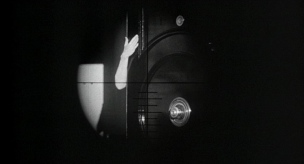 Visually this movie is all California sunshine, and in this case and given the movie’s subtle oddness it’s a more appropriate choice than noir shadows. You can still meet a film noir fate in bright sunshine. Lucien Ballard was responsible for the cinematography and he and director Lerner make all the right choices.

On a superficial level Claude might not seem a typical noir protagonist but in fact he does fulfill many of the requirements of such a protagonist. He seems to lack the necessary desperation and fatalism but in his own way he’s a noir loser. He’s doomed by excessive self-confidence and ambition rather than lust for a femme fatale but his less obvious character flaws lead him to make the bad decisions we expect from a noir character. He thinks he is ideally qualified to be a hitman but he’s wrong.

It possibly could be argued that there was a distinctive “late noir protagonist” and that Claude in this movie and Tony Curtis in Sweet Smell of Success are representative of the type. Those who like to take a particular political view of the world, the view that is so very popular in film schools and academia in general today, will doubtless try to argue that Claude is a victim of the American Dream. In fact Claude is a victim of his own ambition. There always have been and always will be men who think they can take a shortcut to success and that’s merely a common human weakness, a reflection of human nature rather than of society. If there’s one thing that unites film noir protagonists it’s an unwillingness to take responsibility for their own dumb decisions. 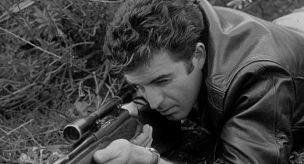 Those who only know Vince Edwards from the long-running Ben Casey TV series will find his performance here to be a revelation. He carefully avoids the obvious clichés and keeps everything low-key which makes Claude’s character quirks all the more disturbing. It really is a very effective performance. Herschel Bernardi and Phillip Pine are also excellent and provide perfect foils for Claude. I don’t know if Quentin Tarantino is a fan of this movie but I’d be surprised if he isn’t. The interplay between these three hoodlums is the sort of thing that would appeal to him, although of course it’s done in a much more subtle style compared to his own approach.

The strange but effective guitar score, clearly influenced by The Third Man, should also be mentioned.

The transfer (from the Columbia Film Noir Classics I boxed set) is anamorphic and it’s excellent. The only extra of note is a brief introduction by Martin Scorcese which is a pity since this movie would have provided plenty of material for a commentary track.

Murder by Contract is offbeat noir but it’s really a little gem of a movie in its own odd way. Very highly recommended.
Posted by dfordoom at 7:24 PM