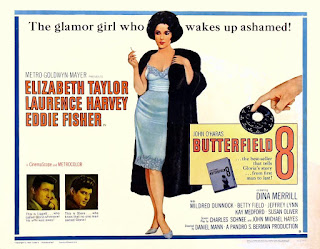 Butterfield 8 is a more interesting movie than its reputation would suggest. It was made at a transitional moment for Hollywood. During the 50s the process of undermining the Production Code had begun. Otto Preminger had shown that the Production Code Authority could be defied. He made a couple of movies that were refused a Production Code Seal of Approval but they were released commercially anyway and did well at the Box Office. By 1960 the Production Code was showing clearly visible cracks.

At the same time the major studios were tentatively exploring the radical idea of making grown-up movies for grown-ups. They were even starting to get interested in making movies that dealt with sex honestly and openly. In 1960 The World of Suzie Wong dealt with an American businessman who falls in love with a Chinese prostitute. In 1961 Breakfast at Tiffany’s was a major hit and although it is not openly stated in the film it is blindingly obvious that Holly Golightly is an expensive high-class call girl. Butterfield 8 was part of the same wave of Hollywood movies about sex.

Butterfield 8 is a steamy sex melodrama about a beautiful socialite, Gloria Wandrous (Elizabeth Taylor), who has slept with so many men that she describes herself as the biggest slut of all time. Her latest conquest is Weston Liggett (Laurence Harvey) but this time it’s different. He’s the first man she’s slept with and then fallen in love with. Which would be a wonderful thing except that he’s married. And his wife Emily (Dina Merrill) is growing tired of his relentless pursuit of skirt.

There’s another man in Gloria’s life. Steve Carpenter (Eddie Fisher) is a childhood friend but it’s obvious to everyone (except possibly to Gloria) that Steve is hopelessly in love with her. It’s certainly obvious to Steve’s fiancée Norma (Susan Oliver).

Gloria has decided that Weston Liggett is the one man she wants and she intends to get him. She intends to have him all to herself.

This is obviously likely to end messily.

By the standards of 1960 Butterfield 8 is very open about sex. In the opening scene Gloria wakes up in bed naked and reaches out for the man she expects to find next to her, and that man is another woman’s husband. Remember that in the heyday of the Production Code married couples were not supposed to sleep in the same bed. Shortly afterwards we see Gloria and Liggett arrive at a motel in the middle of the day. For contemporary audiences a movie that made it absolutely crystal clear that a woman is having sex with another woman’s husband would have been pretty startling.

What makes this transitional phase in Hollywood history interesting is that Hollywood was still not quite sure how to handle such a story. Under the Production Code Gloria would have to severely punished for her sexual sins. The favoured way of dealing with such a situation was to have the woman redeemed by a noble self-sacrificing death. In 1960 the studios were not sure whether to continue to play safe and have the wicked woman die for her sins or whether to allow her to find happiness. They just weren’t sure which way to jump. For obvious reasons I’m not going to tell you which way this film jumps.

Butterfield 8 was at the time widely dismissed as a trashy movie based on a trashy novel. It has never quite been able to escape that reputation.

One of the problems is that Butterfield 8 really is trashy. It’s an overheated sweaty sex melodrama. I happen to like overheated sweaty sex melodramas. Butterfield 8 reminds me just a little of Valley of the Dolls - it’s a movie that takes itself too seriously and ends up veering into camp territory. Butterfield 8 is nowhere near as camp as Valley of the Dolls but it does have that slight tendency. It has a lot of overblown moments, and a lot of pompous dialogue. On the plus side there are some delightfully catty exchanges between Gloria and Norma.

One thing we have to confront is the question of what Gloria actually does. While movies like Breakfast at Tiffany’s skirted around the prostitution question Butterfield 8 seems to go to great lengths to persuade us that Gloria isn’t a prostitute. But there are things about the plot and about the motivations of the characters that don’t make sense if she’s not a prostitute. It’s just possible that she inhabits the ambiguous world of mistresses who are in practice courtesans. But the whole telephone thing certainly suggests that she’s a call girl.

If there’s an underlying theme to this movie it’s people being dishonest with others and with themselves about sex, and rushing to make judgments on others and on themselves about sex. Liggett loves Gloria but he won’t leave his wife for her because his wife Emily is the sort of virtuous woman that you marry whereas he considers Gloria to be a slut. Gloria’s friend Steve Carpenter genuinely cares about her and is sexually obsessed with her but he also considers her to be the kind of Bad Girl that men don’t marry. He also considers her to be a slut. And she considers herself to be a slut or a whore or both.

Gloria’s mother manages at one and the same time to think that her daughter is a slut and a virgin who is saving herself for marriage. She cannot accept the truth that Gloria has sex with men and enjoys it.

It’s interesting that Gloria doesn’t really feel guilty about having sex with a married man. What she feels guilty and ashamed about is the fact that she enjoys sex.

Elizabeth Taylor won the Best Actress Oscar for this film (a film she hated) and there’s some controversy about that as well. There was a widely held belief that it was a “making amends” Oscar, that she only won the award because the Academy belatedly realised they should have given her the Oscar for Cat on a Hot Tin Roof. There’s no question that she deserved an Oscar for that film but personally I think she won for Butterfield 8 because she gave a damned good performance. Whether the movie itself was worthy of her is another matter.

What can be said is that Miss Taylor really does steam up the screen. At this stage of her career she positively oozed sex. Fortunately that’s exactly what this rôle calls for and she goes all out.

And then there’s the matter of her co-star. Laurence Harvey is an actor a lot of people love tp hate. He routine gets described as wooden or dull. Personally I think that’s because the absurd histrionics of Method Acting were all the rage at the time. Harvey was a real actor and he gave subtle believable performances. He’s an actor I admire quite a bit but I have to admit that there are many who disagree with me.

I don’t think Butterfield 8 has had a Blu-Ray release but the Warner Home Video DVD offers an excellent anamorphic transfer.

Butterfield 8 isn’t a great movie but it’s a lot more interesting that it seems to be on the surface. For that reason it’s recommended.