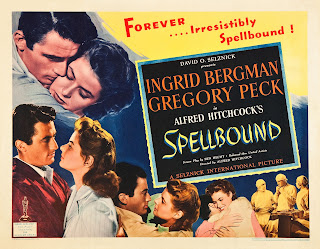 Alfred Hitchcock’s Spellbound presents some challenges to a modern viewer. It’s about psychoanalysis. Audiences in 1945 would have taken psychoanalysis quite seriously and considered it to be science. Nobody today takes Freudian psychoanalysis seriously. This means that a modern viewer is likely to find much of the plot to be absurd and silly. The movie is going to have a camp vibe which was obviously not intended.

Fortunately this is a Hitchcock movie and Hitchcock didn’t care too much about the plots of his movies anyway.

Dr Constance Petersen Ingrid Bergman is a psychiatrist at Green Manors Hospital, a mental hospital. The director of the hospital, Dr Murchison (Leo G. Carroll) has been forced to relinquish his post after having a mental breakdown. His replacement, Dr Anthony Edwardes, is about to arrive to take over. Dr Edwardes (Gregory Peck) is much much younger than anyone expected. 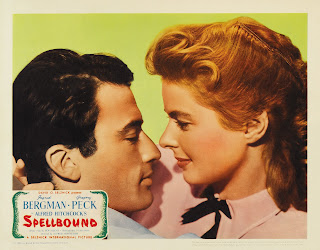 He takes an immediate shine to Dr Petersen. Dr Petersen has dedicated herself to her work and has had no time for nonsense like love. She’s likeable enough but she takes her work very very seriously. She’s bookish and intellectual. But young Dr Edwardes sweeps her off her feet. She realises that she is capable of love after all.

There is however something not quite right about Dr Edwardes. He’s jumpy. Silly little things upset him. He cracks up in the operating theatre. Dr Petersen is head-over-heels in love with him but she’s not a complete fool. She realises that whoever this man is he’s not Dr Edwardes (we later find out that his name is John Ballantyne).

He admits that he’s not Dr Edwardes but the trouble is that he does not know who he is. He has amnesia. And he has quite a few other issues as well. 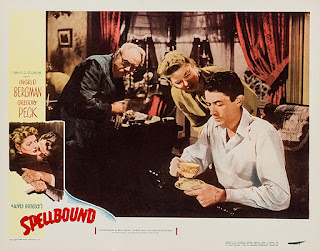 The real Dr Edwardes has vanished. The assumption is that the imposter has murdered him. The police are now hunting him. Dr Petersen has decided that the imposter is sick but harmless. She assumes he’s harmless because she’s in love with him.

Either psychiatric ethics were very loose in the 1940s or Dr Petersen is the most unethical and unprofessional (and recklessly irresponsible) psychiatrist in history. She’s not only prepared to let a man who might be a murderer escape from the police, she escapes with him. And she allows herself to become hopelessly romantically involved with him even though she’s treating him as a patient.

Even allowing for the fact that psychoanalysis is inherently absurd the movie’s treatment of the subject is ludicrous and silly beyond words. 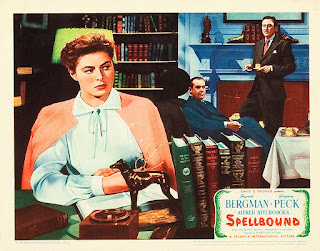 A minor problem is that both Ingrid Bergman and Gregory Peck are just a little too young for the rôles they play. We’re supposed to believe that Dr Petersen is not just a qualified psychiatrist but an experienced one. Bergman was 30 and just doesn’t quite convince us that she could hold such a responsible position at a major mental hospital at that age. Gregory Peck was even younger and there’s no way on earth he could get away with masquerading as an eminent psychiatrist.

Bergman is also perhaps a little miscast. She is not the slightest bit convincing as a psychiatrist.

That’s perhaps not entirely her fault but due more to the chaotic mess of a script penned by Ben Hecht. Hecht contributed some of the most embarrassing dialogue in movie history. Bergman is a fine actress but nobody could deliver some of these lines without sounding ridiculous. She does her best and it’s to her credit that her performance works at all. 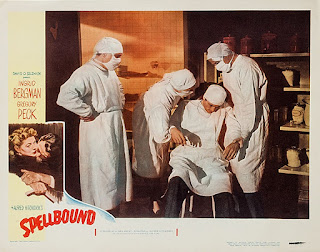 So Spellbound has all the makings of a total trainwreck. In spite of this there’s plenty to enjoy here. Hitchcock gives us his usual moments of visual brilliance. There’s some good suspense. The Salvador Dali-inspired dream sequence was daring and original at the time and it’s still quite impressive even if it’s silly and outlandish.

Hollywood went gaga over psychiatry movies in the 40s. None of those movies can possibly be taken seriously but most are fun to watch. Otto Preminger's Whirlpool is the only one that can be taken semi-seriously and it's a much better movie than Spellbound.

Spellbound was a huge hit in 1945 and a critical success as well. Today it is best approached as a beer-and-popcorn movie. If you have plenty of popcorn and a lot of beer you’ll enjoy yourself.
Posted by dfordoom at 12:49 PM