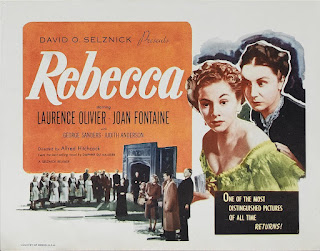 Rebecca was a major hit in 1940 and is the only Hitchcock movie to win a Best Picture Oscar.

In the late 30s Hitchcock was riding high. He was the hottest director in Britain and his international reputation was growing steadily. It was obvious that Hollywood would try to lure him away. Selznick made him the proverbial offer one can’t refuse. But he really should have refused it. Going to Hollywood at the beginning of the 40s was in retrospect a mistake and signing with Selznick was a huge mistake.

Selznick of course interfered constantly with the production. He had his own ideas of what kind of movie he wanted and those ideas did not coincide with Hitchcock’s. 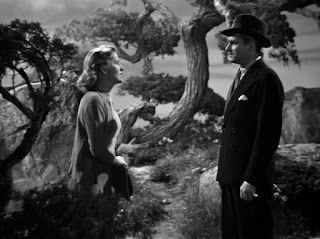 The superb opening sequence (one of the best in all of cinema) sets the tone right away. This is the world of gothic romance. The extraordinary house, Manderley, looks like it should be on the cover of a romance novel. When we’re introduced to Maxim de Winter (Laurence Olivier) he is clearly established as the hero of a romantic melodrama. And it’s obvious that Joan Fontaine is going to be playing a romantic melodrama heroine.

When she first sees Maxim standing on a clifftop the unnamed heroine (Fontaine) is convince he’s about to jump. He scoffs at the idea but it’s entirely possible that he did intend to jump.

The heroine is acting as paid companion to a perfectly appalling rich middle-aged woman. Maxim runs into her again and is charmed by her. She cannot understand what the handsome rich Maxim de Winter would be interested in such a silly little fool (which is how she regards herself) although as the story unfolds it becomes obvious that she is exactly the sort of girl he would fall for. He knows right from the start that she is the woman he wants, and needs. 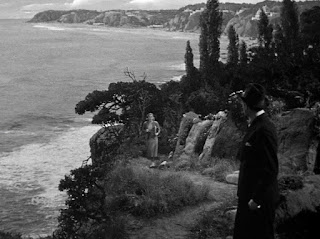 Maxim marries her and takes her to live at Manderley. It’s all rather intimidating. She’s not used to managing a household with a couple of dozen servants. Maxim assures her that the housekeeper, Mrs Danvers (Judith Anderson), will take care of everything. That’s where life really becomes a nightmare for the heroine. She’s afraid of almost everything and she’s particularly afraid of Mrs Danvers. With good reason. Mrs Danvers makes her disapproval very obvious. The heroine finds herself constantly being compared to Maxim’s first wife, Rebecca. She is constantly told that Rebecca was gorgeous, sophisticated, witty, exquisitely dressed. The heroine is painfully are that she falls short in every one of those areas. She is convinced that Maxim only married her out of pity and that he is still in love with Rebecca. Mrs Danvers has kept Rebecca’s room exactly as it was on the night she died, as a kind of shrine. Mrs Danvers worships Rebecca’s memory and it’s obvious that she intends to make the heroine’s life at Manderley a living hell.

Rebecca was drowned in a boating accident a year earlier. The heroine is continually reminded of how devastated Maxim was and how he has never recovered from Rebecca’s death. 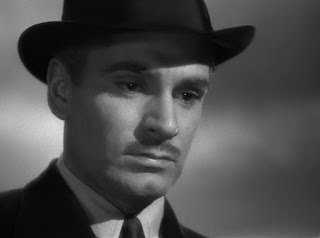 I’ve always considered Laurence Olivier, as a film actor, to be an entertaining ham. It has to be admitted however that in this movie he keeps his hammy tendencies rigidly under control and he is certainly perfectly cast as the brooding tortured Maxim de Winter. His performance works very well.

Not everybody likes Joan Fontaine. Selznick apparently wanted Nova Pilbeam as the female lead. Based on her performance in Hitchcock’s wonderful Young and Innocent (1937) she might have been a god choice. Hitchcock thought she was very good but too young. Joan Fontaine got the part and for me her performance works. Yes, she’s timid and mousy but she’s playing a character who is timid and mousy. And she has enough vulnerability and charm to make it perfectly plausible that Maxim would fall for her. I think Fontaine is superb in this movie.
George Sanders is fun in a small part as Rebecca's degenerate cousin. Judith Anderson is positively terrifying.

There is a theory that Hitchcock wanted to make a suspense movie and Selznick wanted to make a women’s picture. There’s obviously a lot of truth to that but it’s worth pointing out that Hitchcock didn’t need Selznick to introduce him to the idea of making movies aimed at female viewers. And this was Hitchcock’s second Daphne du Maurier adaptation (the first being Jamaica Inn) and du Maurier was a writer of gothic romance melodramas. There is however little doubt that Rebecca is more of a woman’s romance movie and less of a suspense movie than Hitchcock had intended. Selznick usually got what he wanted. 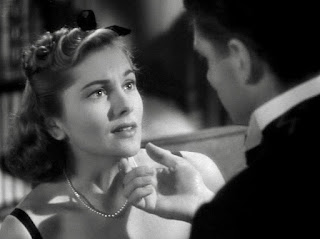 A more important question is whether people who dismiss Rebecca as a lesser Hitchcock film do so precisely because it is a “women’s picture” and a melodrama.

This movie has Selznick’s fingerprints all over it. Apart from the great opening sequences there are none of the spectacular visual set-pieces you expect from Hitchcock. It is of course superbly shot with plenty of nice little visual touches but overall it does not feel like a Hitchcock movie. This is all pure romantic melodrama. There is some mystery late in the movie, and a small amount of suspense, but Rebecca is essentially a melodrama. It is very much in the mould of the 1940s Hollywood women’s picture.

Whether that is a problem for you depends on how you feel about melodrama. If you’re expecting a Hitchcock thriller you’ll be very disappointed. If, like me, you actually enjoy melodrama then Rebecca is one of the great movie melodramas. Very highly recommended for gothic romance and melodrama fans.
Posted by dfordoom at 5:06 PM