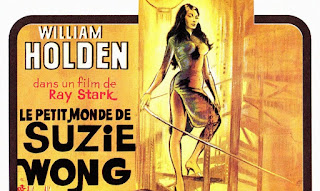 The World of Suzie Wong was released in 1960 and was a major hit.

From around 1958 to around 1962 was a fascinating period in Hollywood history where censorship was concerned. Censorship was already looking a bit shaky. In 1953 Otto Preminger’s The Moon Is Blue was the first Hollywood movie to be released without a Production Code Seal of Approval. The conventional wisdom was that this was impossible. Not having a seal would mean no distribution and financial ruin. But The Moon Is Blue was a hit. Preminger did the same thing again in 1955 with The Man With the Golden Arm. Few people in Hollywood had Preminger’s toughness, courage and self-confidence but by the late 50s there was a growing feeling that something would have to be done to allow Hollywood to make grown-up movies.

A major step in this direction was taken by Cat on a Hot Tin Roof. Maggie the Cat (Elizabeth Taylor) is as crazy as a cat on a hot tin roof and the reason is made very obvious. She’s not getting any sex. What was shocking was not the revelation that her husband Brick was incapable of performing in the bedroom. The shocking thing is that the movie showed us a woman who simply cannot remain sane without regular sex. Everything to do with sex was scary but this movie was confronting the scariest thing of all - female sexual desire. 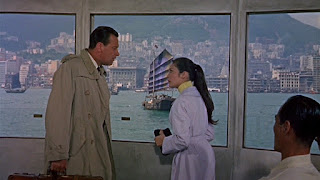 In 1961 came Breakfast at Tiffany’s, which made the fact that Holly Golightly (Audrey Hepburn) is a call girl reasonably clear whilst still maintaining plausible deniability. Maybe Holly Golightly is just a really friendly girl who has a lot of men friends although there’s still the slight problem that she has an apartment in Manhattan, wears expensive designer dresses and has no visible means of support.

The World of Suzie Wong also pushed the edge of the censorship envelope, and pushed it hard. This was a very big-budget major studio production in which the leading lady, the hero’s love interest, is absolutely unequivocally a prostitute.

Hollywood was however still treading carefully. We’re expected to believe that the hero, Robert Lomax (William Holden), doesn’t hire her for sex. He just wants to paint her. His sexual interest in her is however made pretty clear but again there’s some plausible deniability. Clean-cut all-American men don’t sleep with prostitutes. 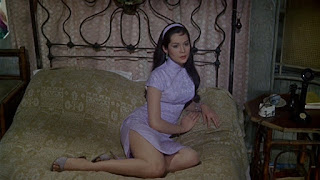 Lomax meets a pretty Chinese girl on the Hong Kong ferry. She tells him that her name is Mei Lee, that her father is very rich and that she is a virgin. Lomax encounters her again when he gets to his hotel. The Nam Kok Hotel is in practice a brothel, although the proprietor is at pains to assure him that it isn’t technically a brothel (which would be illegal). In the bar he runs into Mei Lee again, although it tuns out that her name is really Suzie Wong, her father isn’t rich and she most definitely is not a virgin. She is the most popular whore in the hotel.

Lomax wants to use Suzie as a model. She is rather offended that he doesn’t want to sleep wth her. There is some playful naughtiness here. When Lomax asks Suzie to pose for him she immediately offers to take her clothes off. He says he’s never done nudes. She tells him this would be a good time to start.

Lomax is fascinated by Suzie but he tells her he doesn’t want to get involved with women again. Which is of course a lie. He’s romancing Kay, the English daughter of a banker. What Lomax means is that he doesn’t want to get involved romantically with a whore. He’s a bit half-hearted about the romancing of Kay because he’s pretty confused. He keeps thinking about Suzie, then gets angry at himself and at her. He’s clearly very attracted to Suzie and also appalled that he’s attracted to a prostitute. 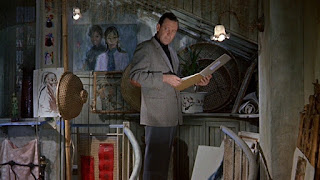 So the bulk of the film is occupied by Lomax’s desperate attempts to convince himself that he doesn’t want Suzie.

There’s also some amusing cultural confusion. At one point Suzie is beaten up by a sailor. She tells her friends that Lomax beat her up in a jealous rage. It’s not a malicious lie. It gains her a great deal of status (the other girls wish they had boyfriends who loved them enough to beat them up in jealous rages) and it increases Lomax’s status in the eyes of the other prostitutes.

Kay is determined that she is going to marry Lomax and she doesn’t see it as any kind of contest. She assumes that there is no way Lomax would choose a Chinese prostitute in preference to the beautiful daughter of an English banker.

Of course the big question for the viewer, bearing in mind that this is America in 1960, is will the studio risk allowing an ending in which Suzie and Lomax end up together? To get the answer to that question you’ll have to watch the movie. 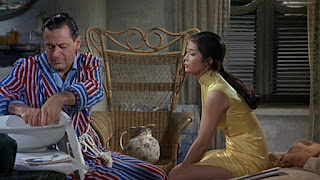 William Holden is not my favourite actor but he’s good here, taking into account that he’s playing a character who is not overly sympathetic. Nancy Kwan as Suzie is an absolute delight. The supporting performances are very strong with my favourite being Jacqui Chan as Suzie’s friend Gwennie. Gwennie is pretty but she looks like a librarian even though she is in fact a prostitute as well. She’s great fun.

Paramount’s Region 1 DVD is barebones but the 16:9 enhanced transfer is excellent. This is a very handsomely mounted production with great location shooting and would benefit greatly from a Blu-Ray release.

The World of Suzie Wong is a romantic melodrama generously laced with humour and it marked a major step forward for Hollywood in terms of dealing with sex openly and honestly. It’s an important movie for that reason, and it’s a very good movie. Very highly recommended.
Posted by dfordoom at 7:29 PM