Born Reckless is an unassuming little 1958 rodeo musical melodrama B-picture that turns out to be thoroughly enjoyable mostly due to its star, the wonderful Mamie van Doren.

Kelly Cobb (Jeff Richards) is a rodeo star whose career can’t last much longer because his body just can’t take the punishment any more. At the moment he’s flat broke, which is usual. Even when things go well they go badly. He wins a hefty slice of prize money at a rodeo but a crooked promoter runs off with the money and Kelly is still flat broke. He travels around the country with his sidekick Cool Man (Arthur Hunnicutt), an older and even more broken down ex-rodeo star who acts as a father figure to Kelly. Kelly hopes for one big win so he can buy a little ranch, but that one big win seems more elusive by the day. 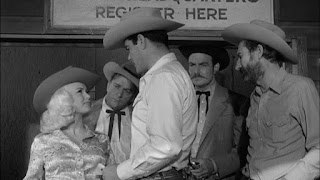 Jackie’s a nice girl but when you have a body like hers you don’t have to go looking for trouble. Trouble will find you. And trouble always means a man. Kelly doesn’t see himself as the knight in shining armour type but he’s an old-fashioned guy. If a woman is attracting unwanted attention from some sleazebag then he’s not the sort of man who’s going to stand by and let that happen. A fight invariably follows and Jackie spends much of her time patching up Kelly’s wounds. Kelly always wins his fights, but he doesn’t escape without an assortment of cuts and bruises. 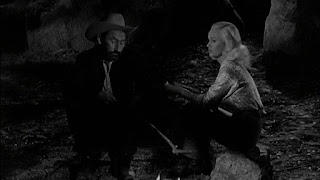 It seems like love is destined to blossom but there’s a problem for Jackie. She has a rival. Liz is rich, scheming, unscrupulous and she collects men the way other women collect shoes. And the unfortunate truth has to be admitted that Kelly does like chasing the ladies. Liz is a formidable rival, but Jackie is a fighter.
It's amusing that the brunette is the bad girl and the blonde bombshell is the good girl.

Mamie van Doren is likeable, lively, sexy, funny, high-spirited and generally adorable. She was never able to make the jump to A-pictures but when she landed a good role she could turn in a very effective performance. And she sparkles here. She gets to sing quite a few songs. The songs aren’t bad and if a song was even half-decent van Doren could sell it. She also looks terrific dressed as a cowgirl. 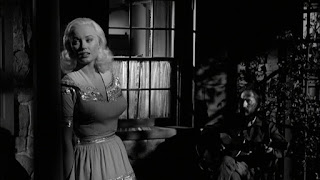 Howard W. Koch was a competent B-movie director and he demonstrates a surprisingly sure touch in this movie.

It might seem presumptuous to compare this movie with Sam Peckinpah’s superb Junior Bonner but as a low-budget attempt to explore similar themes it works a whole lot better than you’d expect. The characters in Born Reckless are a bit more than stereotypes. There’s a touch of subtlety to the characterisations that you really don’t expect in a B-movie, and there’s a nice atmosphere of creeping defeat and melancholy. Kelly knows he’s probably not destined to be one of life’s winners but all he knows how to do is be a rodeo cowboy and he can’t see any really promising way forward. 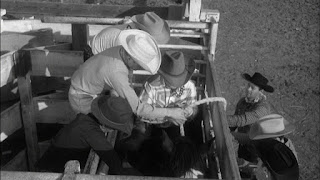 The Warner Archive release is barebones but the anamorphic transfer is generally very good.

Born Reckless is a pleasant surprise. It’s a much better movie than it has any right to be. Along with Guns, Girls and Gangsters (1959) and Untamed Youth (1957) it’s one of van Doren’s best pictures. It offers her a role with enough substance to allow her to demonstrate why she was such a B-movie icon, and why she still has a loyal following.

Born Reckless is highly recommended.
Posted by dfordoom at 7:09 PM