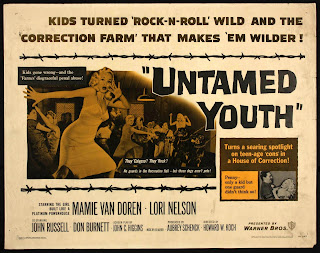 Penny Lowe (van Doren) and her sister Jane (Lori Nelson) are aspiring singer/dancers on their way to LA when they get busted by a small-town sheriff for skinny-dipping and hitch-hiking. Judge Cecilia Steele (Lurene Tuttle) gives them the choice of thirty days in the county lock-up or thirty days as agricultural workers. Naturally they chose the agricultural worker option.

What they don’t know is that they’ve been caught up in a racket run by the judge, the sheriff and crooked cotton farmer Russ Tropp (John Russell). Young people get arrested by the sheriff on bogus or ridiculously trivial charges and end up picking cotton for Tropp for 75 cents a day. There’s a shortage of cotton pickers so this is a huge advantage for Tropp - the other cotton farmers in the country can’t get labourers while he’s getting virtual slave labour for peanuts. The other farmers will eventually have to sell out to him and he’ll end up filthy rich. The sheriff gets paid off and the middle-aged judge thinks she’ll end up marrying the young handsome Tropp. 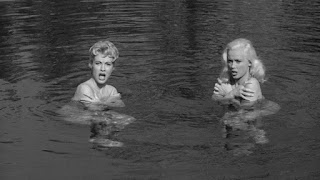 Tropp is involved in all manner of crooked business dealings and the prisoners at the farm are mercilessly exploited. Tropp also sexually exploits the female prisoners (adding another exploitation movie angle) and he tries it on with Penny. When Penny rebuffs him he sets his dogs on her.

Tropp has made one miscalculation. He’s employed Judge Steele’s son Bob at the ranch. Bob is a straight arrow and he falls for Jane Lowe, and he starts digging around looking for evidence of Tropp’s shady dealings.

So that’s the melodrama angle. There’s also the exploitation angle (juvenile delinquents, Mamie van Doren in tight dresses). And within the first few minutes we get a cat-fight when Jane Lowe gets into a dispute with one of the other girls at the farm. 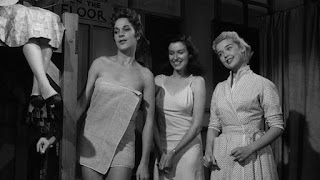 All of this would have made for an OK B-movie but Untamed Youth has rock’n’roll as well. The kids amuse themselves after a hard day’s cotton-picking dancing to rock’n’roll and from time to time they spontaneously burst into song in the cotton fields.

The big surprise, and it’s a very pleasant one, is that the songs are great. It helps that one of the young cotton-pickers is played by Eddie Cochran, about a year before he became a major rock’n’roll idol. Eddie Cochran gets one very good song but Mamie van Doren gets four songs and she’s terrific. Oo-Ba-La Baby (co-written by Eddie Cochran) is a show-stopper. 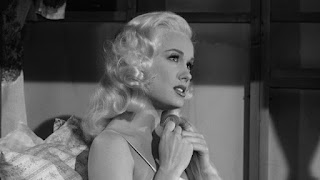 Perhaps Mamie van Doren isn’t the world’s greatest actress but she has presence and charisma and this rôle is well within her acting range and she acquits herself well. She’s smokin’ hot, she has the right moves when she dances and her songs are good. This was one of her favourite rôles and it’s easy to see why.

Lori Nelson is very good although she’s overshadowed by Mamie van Doren. But everyone in this movie is overshadowed by Mamie van Doren. Lurene Tuttle is reasonably good. John Russell as Tropp is memorably slimy. The other cast members are quite adequate. It’s not as if any of the characters are complex or well-developed. They’re not meant to be. This is a lightweight B-movie. 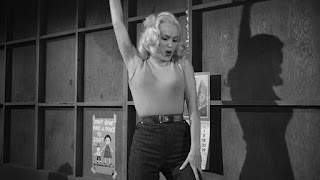 Untamed Youth has been released on DVD is the Warner Archive series, with a good anamorphic transfer and no extras.

Untamed Youth is not a movie to be taken at all seriously. It’s not a good movie in a conventional sense but it is a very good cult movie. It has juvenile delinquents, rock’n’roll and Mamie van Doren. And it’s fun. That’s enough to keep me happy. Highly recommended.

I’ve reviewed several other Mamie van Doren movies in the past year or so - The Girl in Black Stockings, Vice Raid and the wonderful Guns, Girls and Gangsters.