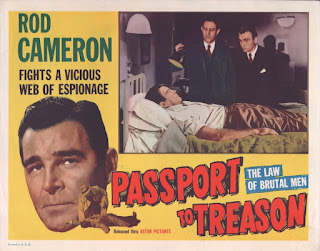 Mike O’Kelly (Rod Cameron) is an American private eye living in London. He often does work for Ben Conner’s enquiry agency. Mike has been asked to help on a case that Ben thinks is too big to handle alone. On his way to Conner’s office, in heavy fog, Mike encounters a number of men obviously in an extreme hurry either to go somewhere or get away from something. One of them drops a passport, in the name of Amedeo Sacchi.

When Mike arrives at Conner’s office he finds Conner dead, and the office has been rifled. Mike decides to needs to know more about Amedeo Sacchi. 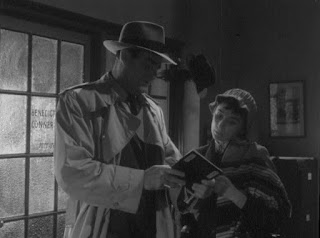 He searches Amedeo’s flat and is interrupted by a very jumpy young man with a gun. Mike has no problem dealing with the guy and now he’s getting more and more interested.

He gets even more interested when he meets Orlando Syms (Clifford Evans). Syms runs a group called the International League for World Peace (and writes spy thrillers in his spare time). Syms has been informed that the league has been infiltrated by a secret group. Syms had hired Ben Conner to uncover the truth about this secret group. Now he wants Mike O’Kelly to continue the investigation.

Not everybody in the League is happy about the investigation. Arrogant Harley Street specialist Dr Randolph (Douglas Wilmer) is dead set against it. 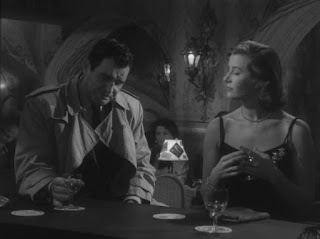 It soon becomes apparent that there are quite a few people who want O’Kelly off the case. Including Diane Boyd (Lois Maxwell). O’Kelly isn’t sure which side Miss Boyd is on. She says she’s trying to warn him off for his own protection.

And there have now been two murders. O’Kelly knows he’s onto something big but he’s about to realise, in a very painful manner, just how nasty the people he’s up against really are. They have more ingenious methods than mere crude violence for dealing with meddling private enquiry agents.

O’Kelly is in possession of a vital clue, if only he knew what it meant. It would also help if he had some idea what this secret group within the league was all about but that’s something else he doesn’t know. 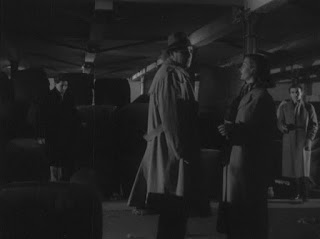 Passport To Treason was produced by Robert S. Baker and Monty Berman, with Baker directing and Berman doing the cinematography. Baker and Berman went on to great success in television in the 60s, notably as producers of The Saint and Gideon’s Way.

Kenneth R. Hayles and Norman Hudis wrote the screenplay, based on the novel by Irish spy fiction writer Paddy Manning O’Brine (who was rumoured to be a former British spy).

Craggy-faced Canadian Rod Cameron later starred in the short-lived but rather interesting American private eye series Coronado 9 in which he plays a character not unlike Mike O’Kelly - a big shambling gruff tough guy (in fact very tough) but kind of likeable in his own way. 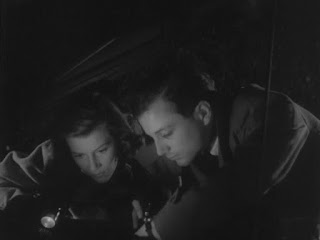 The whole cast is quite strong, with John Colicos being nicely sinister.

There are some noirish visual touches - lots of fog and shadows and some good night scenes. While there’s nothing particularly noir about the story there is plenty of paranoia.

Passport To Treason is one of the nine feature films in the Renown Pictures Crime Collection Volume 1 boxed set (an excellent value-for-money set). The transfer is reasonably good.