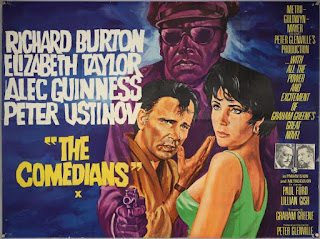 Graham Greene adapted his own novel for the 1967 movie The Comedians. The movie follows the novel fairly closely except for the ending.

Mr Brown (Richard Burton) has returned to Haiti after a three-month absence. Haiti was at that time under the brutal dictatorship of François Duvalier (known popularly as Papa Doc) so returning there was not a good idea but there are two things that brought him back. The first is that he owns a hotel there, and the Hotel Trianon is the only thing of substance he has ever owned in his life. The second thing is his desire to rekindle his love affair with Martha Pineda, the German wife of the ambassador of an unnamed South American country (the ambassador is played by Peter Ustinov). He has no idea if he loves Martha but he cannot keep away from her. He cannot get her out of his system.

Haiti at this time attracted no tourists at all so the ship which brought Brown back to Haiti brought only a handful of other passengers. These included Major Jones (Alec Guinness) and Mr Smith (Paul Ford) and his wife (Lillian Gish). The fates of Brown, Jones and the Smiths are going to become rather entangled.

Major Jones doesn’t even get to leave the dockside before he is arrested. He has committed a cardinal sin. He has arrived with an introduction to a senior government minister but before his arrival that minister had fallen from power. Under Papa Doc’s regime falling from power means being dead. And having an introduction to such a person is enough to get you arrested by the Tontons Macoute, Papa Doc’s much-feared secret police. Mr Smith has an introduction to the Secretary of Social Welfare, who is now lying dead in the swimming pool of the Hotel Trianon. That could cause difficulties for Mr Smith. And for Brown.

Major Jones claims to have been something of a hero during the Second World War, fighting the Japanese in Burma. Brown has his suspicions about those war stories.

Jones is in fact very familiar with the inside of jail cells. He has a sublime confidence in his own ability to talk himself out of such situations.

Mr Smith is referred to as the Presidential Candidate, on the basis of having been a minor candidate (gaining a handful of votes) in the 1948 election. But being a Presidential Candidate of any kind can be useful in Haiti. Mr and Mrs Smith plan to open a centre for vegetarianism in Haiti. They believe that all of the world’s problems can be solved by vegetarianism. They will discover that Haiti is perhaps not the ideal place for such a project.

Graham Greene was much concerned with faith and innocence. He had problems with both. He was especially afraid of the destructive consequences of innocence. As for faith, it isn’t always easy and like innocence it can lead to fatal delusions. The movie brings out these themes reasonably effectively. Mr Smith puts his faith in vegetarianism, Brown’s friend Dr Magiot (James Earl Jones) in communism, Henri Phillipot (the nephew of the deceased Secretary of Social Welfare) puts his in revolution. Brown is a man who has never been able to put his faith in anything. Maybe he could put his faith in love but an affair with a married woman might not be a wise choice.

Martha is German and that does play a part in the story. Miss Taylor attempts a slight German accent and while it comes and goes it’s reasonably convincing. She very wisely keeps it as subtle as possible. In the book Martha is an undeveloped character and that was deliberate. We only see her though Brown’s eyes and Brown is a man who just doesn’t know how to connect with other people, or how to understand what makes them tick. Martha remains a mystery to him, just as life remains a mystery to him. Of course with Elizabeth Taylor providing the star power for the movie it was necessary to flesh the character out a bit more, which the movie does with mixed success. Taylor does her best and she’s pretty good.

The point I made about Brown’s inability to connect with or empathise with other people explains Burton’s performance. A lot of people hate his performance in this movie but in fact he captures the essence of Brown perfectly. Burton is low-key, and deliberately so. Brown is a man who is a stranger to genuine emotion. Burton knows what he’s doing.

One of the problems that people have with this is the acting. When you have people like Richard Burton, Elizabeth Taylor, Alec Guinness, Peter Ustinov, and James Earl Jones in the cast you expect big performances. But the title of the book refers to the fact that all the key characters are merely actors in the tragi-comedy of life. They’ve all lost the ability to genuinely participate in life. This means that the actors have to give low-key performances rather than bravura performances. Low-key performances are what they do give, and they’re right to do so, but with that cast audiences probably expected some real acting fireworks. The only actor who does give a colourful performance is Alec Guinness, and he does so because his part demands it.

As partial compensation the movie does look stunning. Papa Doc had been enraged by Greene’s novel so filming in Haiti was out of the question. Dahomey in West Africa was chosen instead and the location shooting is impressive. The Hotel Trianon looks simply wonderful, and the scenes depicting Duvalierville (Papa Doc’s showcase new city, his version of Brasilia) are a memorable depiction of folly and delusion.

The ending of the movie is quite different from that of the book but I think both endings work.

I think the main problem with this film was the choice of director. Greene had written successful screenplays before and he understood movies. His three superb collaborations with director Carol Reed (The Third Man, The Fallen Idol, Our Man in Havana) provide ample proof of that. But Greene and Carol Reed were on the same wavelength and Reed was a genuinely great director. Peter Glenville’s direction here is stodgy. The movie looks great and it has some fine moments but it’s too long and too unfocused. Carol Reed could have taken this screenplay and made a great movie out of it.

It’s not a bad movie, it’s just a bit disappointing. All the ingredients are there and the cast is excellent but Glenville just didn’t seem to be able to make the story ignite the way it should have ignited.

The Comedians bombed at the box office and that’s understandable but it’s really a reasonably good movie. It just isn’t the major cinematic event that audiences would have expected considering the star power on display and considering the fact that Graham Greene’s novels were so ideally suited for cinematic adaptation.

This film has its flaws and it really is too long but it’s a much better movie than its reputation would suggest. You just have to keep in mind that the atmosphere of the movie, the atmosphere of defeat and futility, is completely faithful to Greene’s novel. I think it’s worth seeing and I’m giving it a recommended rating.

The Comedians is available in a TCM Burton-Taylor boxed set, in a pretty good anamorphic transfer with a making-of featurette as an extra.
I've also reviewed Greene's original novel.
Posted by dfordoom at 10:42 PM