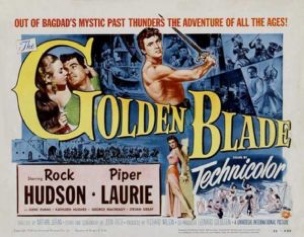 The Golden Blade is a 1953 Universal swashbuckler starring Rock Hudson. It’s one of the many swashbucklers of that era inspired by the tales of the Arabian Nights.

Basra and Bagdhad are engaged in a bitter territorial dispute. Harun (Rock Hudson) is the son of a merchant of Basra. His father is killed during a raid and Harun vows to take vengeance on the men responsible. He has a clue - a medallion dropped by one of his father’s killers.

Not long afterwards Harun comes across a sword in a merchant’s shop. The sword turns out to be a truly remarkable weapon, but only in the hands of the right man. It appears that Destiny has decided that Harun is that man. 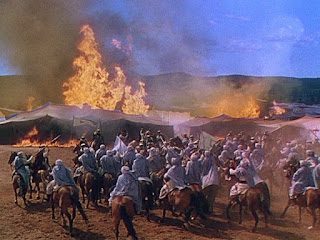 He also encounters a girl. The girl is in the middle of inciting a riot. What he doesn’t know is that the girl (played by Piper Laurie) is the Princess Khairuzan. And their paths will cross again.

The Caliph has problems of which he is as yet not fully aware. His vizier, Jafar (George Macready) is plotting to seize his throne (or rather to seize the throne for his son Hadi with Jafar of course to be the real power behind the throne). It is in pursuit of this aim that Jafar has been stirring up trouble between Baghdad and Basra. In further pursuit of this objective Jafar is hoping to marry his son Hadi to Khairuzan. To say that Khairuzan is displeased when she hears about this marriage plan would be an understatement. She is furious. 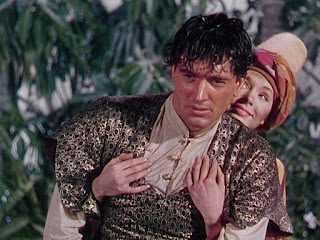 Harun is focused totally on revenge, or at least he was. But now he has the magic sword and according to the inscription on it it is the key to a kingdom. In fact it serves a similar story purpose to the sword in the stone in the King Arthur legends. Now Harun has the possibility of a throne to motivate him, and he has another motivation as well - to win the hand of Khairuzan. And to save her from having to marry Hadi, and to foil the schemes of Jafar.

The magic sword could have presented some story problems. It makes its wielder invulnerable and invincible which would make things too easy for the hero so for most of the story he doesn’t actually have the sword. The sword is really just a symbol anyway - it is Harun’s own skill, courage and honour that makes him a worthy hero and he manages pretty well without it. 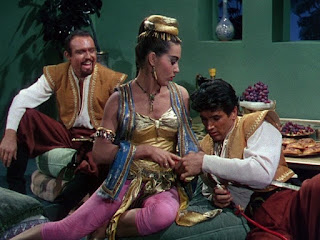 I like Rock Hudson in swashbucklers. OK, he’s not Errol Flynn or Tyrone Power but he does the handsome brave adventure hero thing pretty well and with just a hint of a twinkle in his eye. Piper Laurie makes an amusing feisty heroine. George Macready is a fine villain.

Nathan Juran was a capable director of usually fairly modestly-budgeted adventure and science fiction films. He keeps things moving along at a nice clip. John Rich wrote the screenplay.

The plot is pretty much a stock-standard story of its type.

The Harun in the story is supposed to be the famous Caliph Harun al-Rashid although of course the story has little to do with the historical Harun al-Rashid. Harun al-Rashid was a bit like King Arthur, with countless fanciful tales being told about him (some of which are included in the Arabian Nights). 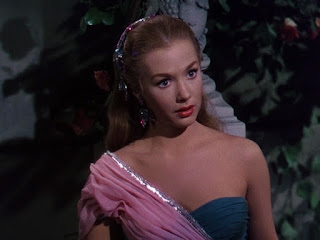 My copy of this film comes from the five-movie Rock Hudson Screen Legend boxed set (which offers a very good transfer) but it’s also been released on Blu-Ray.

I bought this movie on the strength of a glowing review at Laura's Miscellaneous Musings.

The Golden Blade might be somewhat formulaic but it’s extremely well-made, the plotting is solid enough, it looks great, the cast is excellent and it has the right mix of action, adventure and romance with some dashes of humour. It all adds up to terrific entertainment. Highly recommended.
Posted by dfordoom at 12:46 AM