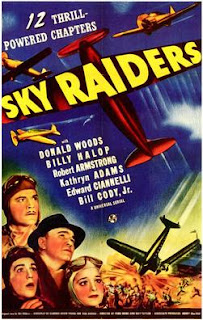 Sky Raiders is a 1941 Universal serial and it belongs to a sub-genre that I’m very fond of, the aviation adventure serial. It’s also a spy thriller so that makes it even more promising.

Captain Robert Dayton (Donald Woods) had commanded an elite fighter squadron in the Great War. Now he runs Sky Raiders Inc, an aviation company that is developing a new high-tech pursuit plane. A ruthless international spymaster, Felix Lynx (Eduardo Ciannelli), is determined to get hold of the plans but there aren’t any plans - everything is in Dayton’s head! So Lynx decides to steal the plane itself. The aircraft is about to make its first test flight. Dayton is supposed to have retired from active flying but he makes the test flight himself. The flight ends disastrously.

Lynx’s next plan is more ambitious - not to steal the new pursuit plane but to kidnap its designer. His plans are of course ludicrously complicated, involving an exact double for one of the main characters. There’s also a sub-plot about a new bomb sight. 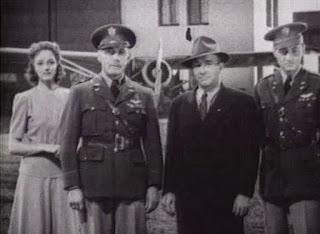 Don’t expect the cliffhanger endings to be quite as inspired as those you get in the best of the William Witney-directed Republic serials but the ones in Sky Raiders are still pretty good.

The aerial sequences are generally excellent and fairly convincing. The miniatures work is extremely well done as are the process shots and there’s a considerable amount of actual aerial stunt work. And there’s lots of aerial stuff - the emphasis is very much on the actual flying with many of the narrow escapes from danger being the result of the normal hazards of early aviation rather than the machinations of the villains. Although the villain does his best to add to those dangers. 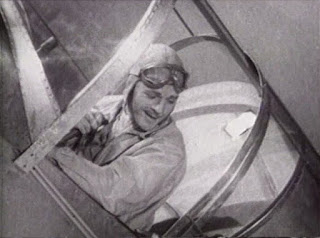 What’s interesting is that the usual serial clichés, like the bad guys kidnapping the heroine, are dispensed with. The heroine certainly finds herself in plenty of danger but in more interesting ways than was usual.

Donald Woods as Dayton makes a fine square-jawed action hero. He’s incredibly stubborn and his determination to do everything himself, including all the test flights, put him in additional danger.

Eduardo Ciannelli plays the villain Felix Lynx. He’s not as over-the-top as some serial villains but he is menacing. 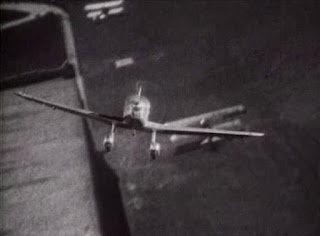 Kathryn Adams is terrific as Mary Blake, Dayton’s devoted secretary who is obviously madly in love with him although of course he somehow manages not to notice. She’s a perfect serial heroine - she’s brave and resourceful but in a very feminine way. She doesn’t pack guns or anything like that but she is a skilled aviatrix which comes in handy on numerous occasions. She gives a lively and likeable performance.

Alpha Video’s DVD release is not great but it’s quite acceptable.

Sky Raiders might not be one of the more famous serials but it’s well worth seeking out. It doesn’t adhere slavishly to serial conventions and it has action, romance and great aerial sequences. Highly recommended.
Posted by dfordoom at 5:02 PM