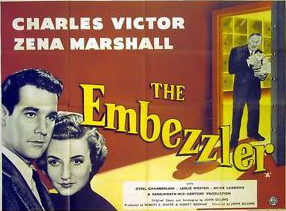 The Embezzler was written and directed by John Gilling, a very underrated British film-maker whose reputation seems to have grown quite a bit in recent years. It’s one of his fairly early films.

It’s obviously a very low budget film with just a few sets but that doesn’t matter because this is a very character-driven crime movie. It’s the unexpected relationships between the characters that draw the viewer in, along with an odd bitter-sweet tone.

Henry Paulson (Charles Victor) is, as the voiceover narration informs us, a little man. For 54 years he has led a blameless life. But not an overly happy or satisfying life. 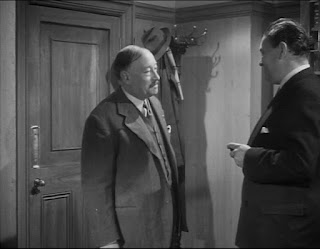 He is entirely dominated by his shrewish wife. He is Chief Cashier at the local bank. Perhaps one day he might become manager of a branch.

And then Mr Paulson finds out that he has only a short time to live. It’s his heart. he has always daydreamed about doing something exciting, perhaps traveling to exotic places. Now that is never going to happen. Or perhaps it will. After all he now has nothing to lose. He could help himself to the contents of the bank vault, and see those exotic places after all. He might even end up in Rio. Why not?

He gets away with the robbery and then sets off on the first stage of his journey. He gets as far as Eastbourne. Eastbourne is an English seaside resort so naturally it is pouring rain when he arrives and takes up temporary residence at an hotel. 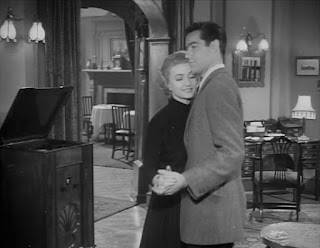 At which point the movie changes gears. It’s not really a crime film after all. Or at least, not entirely.

The residents of the hotel are the usual motley assortment. There’s a jovial middle-aged chap who can be a bit of a bore but he’s good-hearted. There’s a young doctor named Forrest (an early role for Michael Craig) and his wife (played by Zena Marshall). There’s Miss Ackroyd, a lady of a certain age who is a secret drinker. And there’s the good-natured landlady Mrs Larkin (Peggy Mount).

Then a fellow named Alec Johnson (Cyril Chamberlain) turns up. This worries Mr Paulson, who of course has reason to worry since he’s on the run. Johnson seems like he could spell trouble. 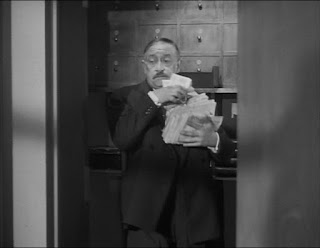 Mr Paulson has spent his life as an innocent bystander rather than active participant but now he finds himself being drawn into the lives of these people. Getting involved in other people’s lives is complicated and difficult but it’s oddly satisfying. Mr Paulson has discovered that he actually likes people. He likes them a lot. Of course the viewer might think that he should be concentrating on getting to Rio but instead he’s getting entangled in a number of interlocking human dramas.

Charles Victor is rather wonderful. He makes Paulson a very sympathetic character, We want him to get away with the robbery. He deserves a few years of happiness. He’s such a nice man. The whole cast is quite impressive. 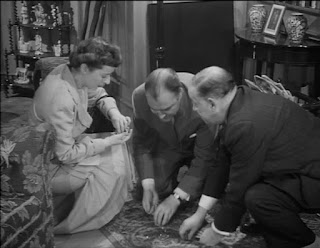 This is a movie that could have descended into sentimentality but it doesn’t. It’s emotional certainly, but not sentimental. There’s some humour as well, and some nice little ironic touches.

I hadn’t heard of The Embezzler until it was mentioned in passing on the Riding the High Country blog.

The Embezzler really is a neat little movie. Highly recommended.

Other John Gilling films that are very much worth seeing and that I have also reviewed include the film noir No Trace and the slightly noirishy spy thriller Deadly Nightshade.