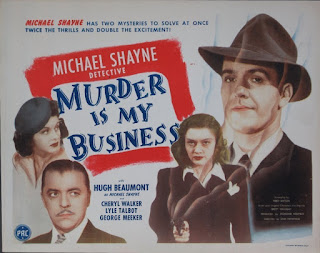 Murder Is My Business, released early in 1946, is the first of the Mike Shayne movies made by Producers Releasing Corporation (PRC) in the 1940s. Private detective Mike Shayne was created by Davis Dresser, writing under the pseudonym Brett Halliday. The novels were successful enough to attract the attention of Hollywood and 20th Century-Fox made seven Mike Shayne movies between 1940 and 1942, all starring Lloyd Nolan. The movie series was revived by PRC in 1946 with five films featuring Hugh Beaumont as Shayne. There would be later radio and TV incarnations as well. Mike Shayne just kept bouncing back.

It has to be said that the movie incarnations of Mike Shayne bear little resemblance to Halliday’s hardboiled creation. 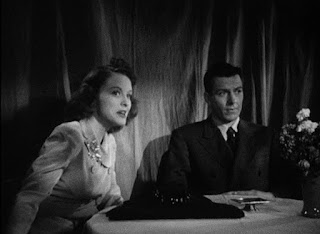 Murder Is My Business wastes no time telling us what we need to know about Mike Shayne. He’s cocky, cheerful and good-natured. The cops hate him, which amuses him greatly.

Mike has reason to be less amused when his latest case goes bad. Really bad. He was hired by a wealthy woman, Mrs Ramsey (Helen Heigh), who’s been receiving threatening letters. Mr Ramsey (Pierre Watkin) then offers Mike a thousand dollars to help him pull an insurance swindle, which of course Mike has no intention of doing. Then two people wind up dead and an old pal of Mike’s, an ex-con named Joe Darnell who’s been trying to go straight, seems to be responsible. And Mike is implicated. Mike is certain it was a setup. To clear Joe’s name (and his own) he’ll have to find the murderer and he won’t get any help from the cops. 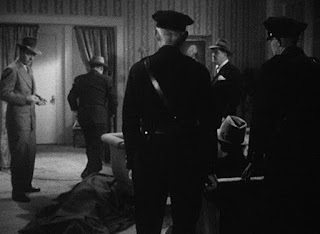 Mike has reason to suspect just about every member of the Ramsey household. He already knows Mr Ramsey is a crook. Mr Ramsey’s two children from a previous marriage, Ernest (David Reed) and Dorothy (Julia McMillan) are obnoxious spoilt brats. There’s also Carl Meldrum (George Meeker). He was having an affair with Mrs Ramsey and more recently he’s been romantically involved with Dorothy. All of these people want to get their hands on the Ramsey bankroll.

There’s also night-club owner Buell Renslow. Since he’s played by Lyle Talbot we know he’s up to no good.

Fred Myton’s screenplay is solid enough, providing us with numerous suspects all of whom are involved in shady dealings but shady dealings don’t necessarily add up to murder.

Sam Newfield was an incredibly prolific but reasonably competent B-picture director and he keeps the pacing satisfyingly brisk. 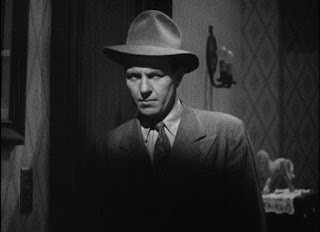 I’m pretty impressed by Hugh Beaumont. He’s more hardboiled than Lloyd Nolan but he has charm and he has the swagger that a private eye needs. And he knows how to trade wisecracks. Lyle Talbot is of course terrific. Cheryl Walker is fine as Mike’s faithful secretary Phyllis Hamilton, who dreams of being more than just Mike’s secretary. She’d like to play at being a private eye too. The supporting players are competent. Carol Andrews gives off the right femme fatale vibes as night-club hostess Mona. Julia McMillan had a very very brief career but I liked her as Dorothy, a girl who’s dangerous because she’s not as tough or as smart as she thinks she is.

Being a PRC production means that this was a very low budget feature but you don’t need much money to make a decent private eye flick. As Jean-Luc Godard once said, all you need is a girl and a gun. 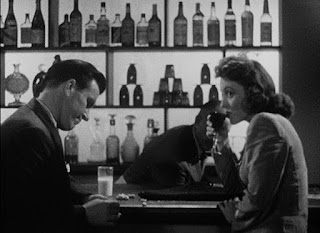 The five PRC Shayne movies have been released on DVD (on a single disc) by Classicflix. Murder Is My Business is obviously unrestored but the transfer is decent enough.

Murder Is My Business is slightly more hardboiled than the 20th Century-Fox Shayne movies. You could describe it as mediumboiled. Fortunately there are no irritating comic relief characters. It offers a decent mystery plot and a likeable lead. There's plenty of action and lots of fistfights (and a catfight as well). It all adds up to very solid B-movie entertainment. I actually enjoyed this one more than the 20th Century-Fox movies. Highly recommended.
I’ve reviewed the 1945 Brett Halliday novel Murder Is My Business which appears to share nothing with this movie other than the title!