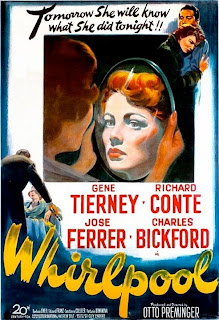 Otto Preminger’s 1949 film Whirlpool is one of those movies that stretch the definition of film noir, although that hasn’t stopped Fox promoting it as such.

Successful psychoanalyst Dr William Sutton and his wife Ann have it all. They have all the material trappings of success, they have status, they have respectability. They’re poster children for the American Dream. Preminger shows us, at first, just the tiniest cloud to their happiness. It’s impossible to imagine it could seriously threaten them. They’re so perfect and so beautiful. They have such a beautiful home.

But Ann has secrets, secrets from her childhood, and they put her in the power of David Corvo, a quack hypnotist, and she finds herself accused of murder.

Whirlpool is a product of 1940s Hollywood’s infatuation with psychiatry and hypnosis and other mysteries of the mind. It requires the audience to believe things about hypnosis that no modern audience is likely to be able to do, but then contemporary movies like Spellbound stretched credibilit 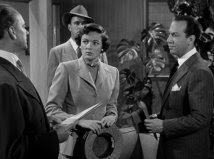 y to the limit as well.

Jose Ferrer does well to make an implausible character, Korvo, seem reasonably plausible. It’s a delightfully oily performance. Richard Conte is solid as Dr Sutton, who eventually has to face up to the fact that he wasn’t as ideal a husband as he thought.

Gene Tierney is Mrs Sutton. She’s often accused of being an indifferent actress but she often had to play characters, in movies like Leave Her to Heaven and Whirlpool, who demonstrated what modern psychiatry likes to call Flat Affect. She seems slightly disconnected and distant but that’s how the character she is playing is supposed to 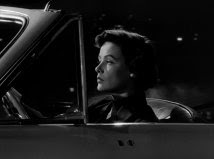 The movie is a fascinating example of the psychiatric thriller that was so popular at the time, and Preminger gives us an interesting and entertaining movie.

This one is also available on DVD from Fox’s Film Noir series, although personally I don’t think there’s anything even remotely film noir about it. It doesn’t matter - it’s a great movie anyway.
Posted by dfordoom at 5:18 PM