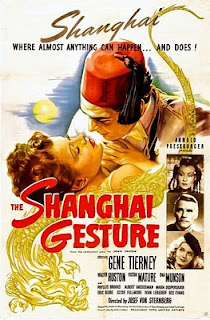 It’s set in Shanghai, presumably at some point during the 1920s or 1930s. A rich young woman, Poppy (Gene Tierney) is lured into a world of corruption, self-destruction and sexual obsession when she discovers Mother Gin Sling’s casino, the biggest and richest in Shanghai. While this is going on Mother Gin Sling is manoeuvring to prevent Poppy’s fabulously wealthy industrialist father (Walter Huston) from driving her out of Shanghai.

The original play was set in a brothel, but apparently the Production Code people decided that showing gambling was OK (because gambling just destroys people’s lives) but it was vital to pretend that prostitution didn’t exist. In fact the change to the gambling theme worked in von Sternberg’s favour because it emphasised the corruption and the degradation. The casino itself is a von Sternberg visual tour-de-force, comparable to the palace in The Scarlet Empress. He gets a wonderful performance from Gene Tierney – she really specialised in playing women who wer 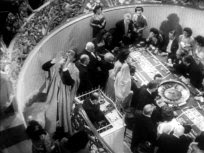 Walter Huston is of course excellent. There are some delicious supporting players – Eric Blore and Mike Mazurki among them. The real star is Ona Munson as Mother Gin Sling. The Hollywood practice of having Europeans playing Asian roles works to von Sternberg’s advantage – it emphasises the stylised feel of the film.

And this is a very stylised film. There are no concessions to reality here. Munson does a fine job. The real surprise is Vic 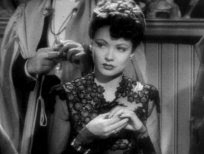 tor Mature as an alleged Persian doctor – he describes himself as a doctor of nothing. It’s an amazingly decadent and sexually ambiguous performance, and it’s an amusing and witty performance. Who knew Victor Mature could act?

The Shanghai Gesture is on Sternberg at his best – delightfully over-the-top and overwrought, very melodramatic, visually gorgeous, disturbing acting performances. A wonderful film. Don’t be put off by negative comments about the DVD quality of the Image Entertainment release – it isn’t great but it’s OK and the movie is so good you can’t afford not to see it. And it’s certainly better quality than Criterion’s DVD of The Scarlet Empress.
Posted by dfordoom at 9:29 PM