Although most sources name The Maltese Falcon as the movie that began the American film noir cycle (or genre, or school, or tendency, or style, or whatever you happen to believe it is) an RKO movie that came out a year before actually has a far better claim to be the first Hollywood film noir. The movie in question is Stranger on the Third Floor.

It has most of the key features of the classic film noir, including voiceover narration, flashbacks and it’s photographed by one of the masters of noir cinematography, the great Nicholas Musuraca. Musuraca’s noir style is already present in this film, with shadows aplenty. It has noir cynicism, with a criminal justice system that doesn’t care if a man is innocent or guilty, and reporters who treat matters of life and death as a joke. The plot also incorporates key noir themes, although I don’t want to reveal too much about it so as to avoid spoiling the movie for those who haven’t seen it.

In broad outline it concerns an up-and-coming reporter who is a key witness in a murder trial, who later discovers the costs of taking what seems to be overwhelming evidence at face value.

Peter Lorre gets star billing. He doesn’t get a lot of screen time, but as usual he makes the most of what he gets. Marga 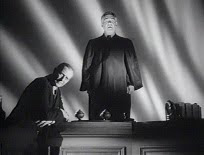 ret Tallichet (an actress who career was surprisingly brief) is very good as the journalist’s girlfriend who starts to have doubts about the case. John McGuire is unfortunately not terribly convincing as the reporter. Elisha Cook Jr, who went on to make so many movies of this type, is the accused man. He overacts as he tended to do, but he’s entertaining as always.

Boris Ingster (whose directing career comprised a mere three films) does a solid job. The movie features the sort of dream sequences that were to become so popular later in the 40s, and these sequences serve effectively to highlight the mod of paranoia, doubt and suspicion. That’s not to say that the movie doesn’t have its faults.

The plot is absurdly melodramatic and contrived, but the film has enough style 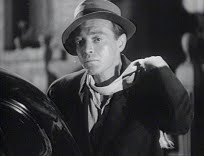 to compensate for this deficiency, and at only 64 minutes running time it’s not likely to wear out its welcome.

It’s not an easy movie to get hold of but Stranger on the Third Floor is of great historical interest and it’s a thoroughly entertaining little movie as well. And stylistically it’s exceptionally interesting and points the way forward for so many of the classic Hollywood movies of the 40s. There had of course been some superb French movies in the noir style in the late 1930s, but this movie is arguably the first serious American attempt at making this type of movie, and it's a fairly successful effort.
Posted by dfordoom at 9:07 PM