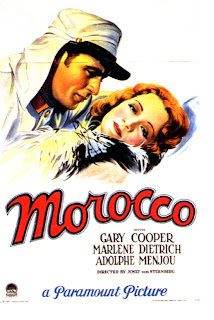 Morocco was Marlene Dietrich’s second movie with director Josef von Sternberg, and her first Hollywood movie. She apparently spoke very little English at this time, which makes her performance even more miraculous.

This 1930 Paramount release has its fair share of pre-code moments.

She plays Amy, a night-club singer (of course), who falls for a somewhat disreputable private in the Foreign Legion (played by Gary Cooper). She in turn is pursued by the wealthy Monsieur La Bessiere (Adolphe Menjou). The initial meeting between Dietrich and Cooper is pure sex. She later says she doesn’t know if she loves him. Which is true, but she knows she’s hot for him.

That’s pretty much the extent of the plot, but plot is beside the point in a von Ster 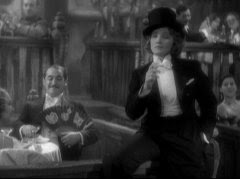 nberg movie. What this movie has is style, it has glorious visual compositions, gorgeous sets, this movie is simply luscious. I loved the scene where Dietrich was running up and down the line of returning legionnaires, looking for her Private Brown. Wonderfully well done. And it has lots of smouldering sexuality. And Dietrich looking fabulous. She sings of course. She never could sing, but that didn’t stop her from being a great singer.

It also has Dietrich’s notorious kiss, the one that made her a lesbian icon.

It’s a wonderfully romantic movie, and marvellously exotic. The 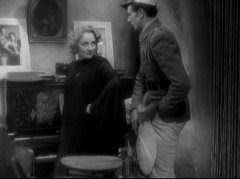 ending is ridiculously romantic and totally absurd, but somehow von Sternberg and Dietrich make it work so that it seems right. After all Amy always said there was a Foreign Legion of women too.

This movie is utterly fabulous, and it looks fantastic on the DVD in the Universal Marlene Dietrich Glamour Collection boxed set (a set I highly recommend).
Posted by dfordoom at 2:30 PM