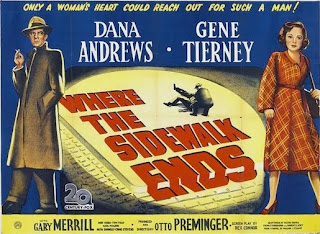 Otto Preminger is rapidly becoming my favourite film noir director, and his 1950 production Where the Sidewalk Ends is yet another Preminger masterpiece.

Mark Dixon is a cop who is much too fast with his fists, and as the film opens he’s in trouble with his superiors once again. As the movie progresses we discover something about the demons that are driving this man. Following up a murder in a gambling joint Dixon resorts to violence once too often, and his world starts to fall apart (although in fact he is already well on the road to disaster before this). Now he has a body on his hands, and the father of the girl he’s just met (and is falling in love with) is the prime suspect. His boss (Karl Malden as a very keen and very upright chief of detectives) is keen to nail dear old dad for this crime, and Dixon has t 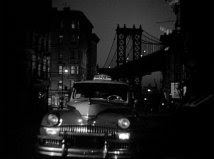 Dixon is also obsessed with his pursuit of gangland boss Tommy Scalise, which not only complicates things but is also a sign of his increasing loss of control over both events and his own feelings.

This may be a movie that actually works better today than it would have done in 1950. We’re possibly more aware of, and more sensitive to, the abuse of power by those in authority than a 1950 audience would have been. Although we feel some sympathy for Mark Dixon, we also can’t avoid being horrified by his behaviour and by his over-fondness for violence.

Dana Andrews does a superb job as Dixon, a man so confused by his own emotions that he no longer has any real insight into his situation or his own actions. Gene Tierney is innocence personified as the daughter whose father is unjustly accused of murder. They key scene in the movie is the moment when 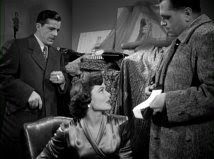 she finally realises that her father’s innocence is not going to automatically protect him, and that her faith in the system is sadly misplaced.

The cynicism of this movie, and its portrayal of a cop who is both dishonest and in fact little more than a thug, are typical of Preminger’s willingness to push the boundaries of the Production Code as far as he could.

Gene Tierney always gave fine performances for Preminger, and this movie is no exception.

Superlative acting by Dana Andrews coupled with some great writing by Ben Hecht and the sure touch of director Preminger adds up to a great example of classic film noir.