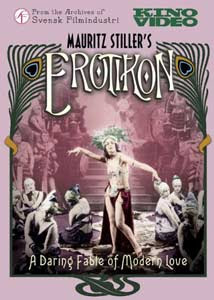 Leo Carpentier is a rather stuffy professor of entomologist. He knows rather a lot about the sex lives of beetles, but rather less about the sex lives of attractive young wives, such as his own. His wife copes with marriage to the somewhat unexciting professor by taking a lover. In fact two lovers. The professor isn’t pleased when he finds out, although if the truth be known he has developed a very cosy relationship with his attractive and fun-loving niece Marthe.

This movie was apparently a major inspiration for the young Ernst Lubitsch, and it has a similar feel to Lubitsch’s films – it’s sophisticated and sexy, and totally lacking in any redeeming moral message. Stiller assembled a superb cast for this movie - Tora Teje is wonderful as the free-spirited wife, Karin Molander is great fun as Marthe, and Anders De Wahl is pompous but likeable as the hapless entomologist. 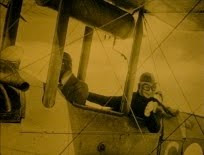 It’s the sort of silent comedy that has nothing whatever in common with the ghastly slapstick comedies that most people associate with that era, and the acting is modern and naturalistic. Stiller was a pretty good judge of acting – among his discoveries was a young actress named Greta Garbo. 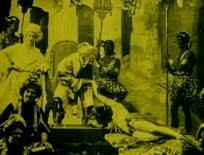 rocious I have ever encountered. It’s both intrinsically awful and ludicrously inappropriate.

On the plus side the picture quality is generally extremely good, and there are some extras including a useful introduction to the film by Peter Cowie. And it preserves the tinting of the original, a feature that adds so much to the distinctive flavour of silent cinema

I highly recommend this one to fans of silent cinema, and if you’re not a fan of silent movies it’s not a bad place to start.
Posted by dfordoom at 2:39 AM