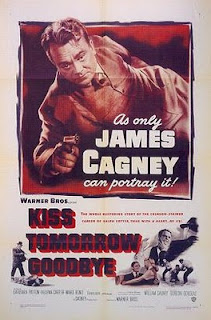 Kiss Tomorrow Goodbye, based on Horace McCoy’s novel of the same name, is one of only a handful of movies starring James Cagney that could be considered as a film noir. It’s told in flashbacks, and although it lacks a film noir hero of the usual type it does have a number of characters satisfying at least some of the requirements of the classic femme fatale.

Cagney’s character is yet another Cagney psycho, Ralph Cotter, who is shown at the beginning of the movie escaping from a prison farm. He’s helped by a young woman with the unlikely name of Holiday Carleton whose objective is to free her brother. The brother doesn’t make it, but Cotter soon makes it plain to Holiday that she isn’t going to be able to get rid of him.

Holiday (played by Barbara Payton) is actually closer to the usual type of noir hero – she’s basically a decent ordinary person who makes one mistake and finds herself hopelessly enmeshed in the criminal underworld, tied to a man who is both vicious and clearly quite mad. But, and this again links her to the classic noir hero, she also falls in love with him, so she’s both a willin 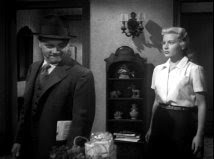 g and unwilling victim, a victim of fate and someone who has chosen their path and chosen badly.

And there are further complications, in the shape of wild rich girl Margaret Dobson, and she’s another ambiguous character, both innocent dupe and would-be femme fatale. Cagney’s performance is effective, as you’d expect in a movie in which he’s cast as a violent psychotic, but it’s the people around him who are far more interesting, and the effect he has on them. Some are already corrupt, while others are corrupted by him.

One very interesting feature, for a 1950 American film, is the extraordinarily honest and forthright way the police are presented – they’re cowardly corrupt thugs, every b 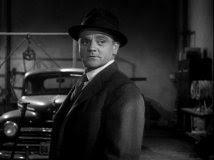 it as vicious as the crooks. The brutality and stupidity of the criminal justice system is also emphasised in the way the prison farm is portrayed.

Kiss Tomorrow Goodbye benefits from a very good supporting cast, something that is crucial in a film that has half a dozen or more important characters. It’s quite violent and quite gritty by 1950 standards.

The Region 1 DVD release includes no extras whatsoever but it’s fairly inexpensive and the movie looks and sounds very good. I recommend this one!
Posted by dfordoom at 2:15 AM