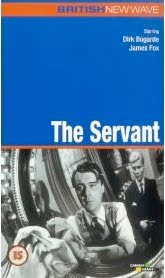 The Servant, made in 1963, was one of three collaborations between writer Harold Pinter and director Joseph Losey, and one of four films which teamed Losey with star Dirk Bogarde. It’s one of those queer films where the queer content is all sub-text, but there’s plenty of sub-text! The Servant seems at first to be simply about class but as the film progresses other undercurrents appear. And it seems to be a role-reversal film, with manservant Barrett (Bogarde) gaining the upper hand over his employer Tony (James Fox). Again, though, the situation becomes more complex.

The class system has corrupted both the oppressors and the oppressed. Tony’s girlfriend Susan is unable to prevent Barrett from taking over Tony’s life, and this is at least partly because she is incapable of thinking of a servant as a human being. There are some subtle hints of homoeroticism which work because they are subtle.

The plot is in essence very simple. Tony is an upperclass man-about- 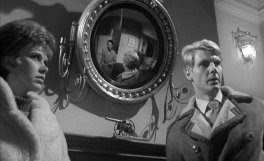 town who advertises for a manservant. He gets more than he bargained for in Barrett. While Barrett sets about gaining control of the household he and Susan become involved in a power struggle for control of Tony. Barrett then brings his “sister" into the house, and she sets out to seduce Tony.

Losey’s direction is fabulous. So many unsettling camera angles, extreme low-angle shots, mirror shots, all contribute to a feeling of things spiralling out of control, and to a feeling of tensions building to unbearable degrees. There’s also a scene in a restaurant in which we hear disjointed pieces of various conversations which have nothing whatever to do with the film, but they again have the effect of making the viewer uncomfortable. There are one or two brief outdoor sequences w 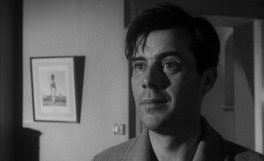 hich only serve to emphasise the claustrophobic hot-house atmosphere of Tony’s townhouse in which almost all of the action takes place.

Bogarde’s performance is superlative, at times menacing, at times downright nasty, at other times charming or obsequious, but always sinister to some degree. James Fox is also superb as Tony. Sarah Miles as Barrett’s “sister” and Wendy Craig as Susan are both solid. The music, a very jazz-influenced score by Johnny Dankworth which includes Cleo Laine singing a song that recurs throughout the film, is very effective. It’s a movie that seems longer than it is, not because it’s dull but because it’s so tense. A great film.
Posted by dfordoom at 1:33 AM