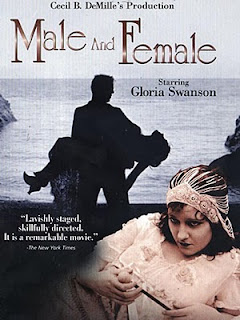 Cecil B. DeMille’s 1919 comedy Male and Female is based on J. M. Barrie’s popular play The Admirable Crichton.

An aristocratic family and various hangers-on, long with their faithful butler Crichton, are ship-wrecked on a deserted tropical island. It is soon apparent that Crichton is the only one who has the slightest idea of how to survive. Before long the class roles have been reversed, with Crichton as uncrowned king of the island and his former employers as his devoted slaves. With the young Lady Mary (Gloria Swanson) being particularly devoted, much to the disgust of her lady’s maid who has long nursed a secret passion for Crichton.

DeMille handles the social satire with surprising skill and lightness of touch. He also manages to introduce a fantasy sequence that lets him transport his ship-wrecked mariners back to ancient Babylon, and as you’d expect deMille has a lot of fun with this segment, and it looks wonderful. The isl 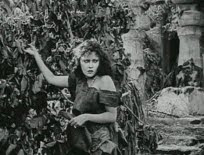 and itself is a typical Hollywood fantasy of a tropical island, with an unlikely assortment of wildlife including the obligatory leopard.

Swanson looks lovely, her acting is restrained and naturalistic and she handles the comedy with ease. Thomas Meighan as Crichton and Lila Lee as the maid are both great – they’re both now all but forgotten, which is a great shame.

I’ve seen other adaptations of Barrie’s play, and this one compares pretty well, and has a surprising amount of bite. This is largely due to Meighan’s excellent performance – you really get the feeling that Crichton is getting enormous satisfaction from humiliating his erstwhile masters. 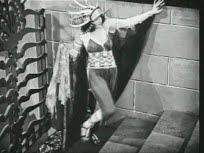 It’s a movie that looks marvellous, and fortunately it’s in superb condition, especially considering it was made in 1919. An absolute must for silent movie fans.

I’m not a fan of silent comedy in general but I do enjoy DeMille’s rather sophisticated efforts in this genre.

This movie is part of Passport Video’s six-disc Gloria Swanson Collection. The transfers are extremely variable in quality, and some are quite poor, but the set is very cheap and includes some great movies.
Posted by dfordoom at 7:13 PM