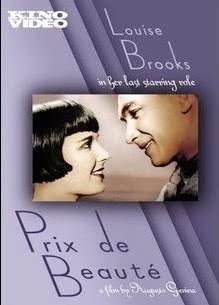 One of the tiny handful of films to feature Louise Brooks in a starring role, Prix de Beauté (Miss Europe) is worth seeing for that reason only. It was one of the very first talkies to be made in France, in 1930, and it was actually started as a silent film. In fact the dialogue is sparse and mostly unnecessary, and it has the feel of a silent film.

It’s a very odd film indeed. It tells the story of a typist named Lucienne who. Much against the wishes of her fiancé Andre, enters and wins a beauty competition. This gives her the opportunity to break into films and thus escape the tedium of both her job and Andre. This doesn’t please Andre at all, who proceeds to behave like a spoilt child whose favourite toy has been taken away from him.

Can Lucienne realise her dream of stardom, or will Andre persuade her to become a meek little obedient housewife? 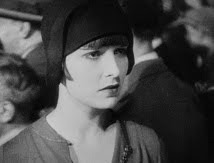 The movie starts out as if it’s going to be a lightweight comedy, and then takes a darker turn, and then takes a very dark turn indeed. Brooks looks fabulous, of course, and her ability to be both very restrained in her acting and at the same time to light up the screen is the main reason people are going to watch this movie. In fact, although it’s an odd mix, it’s an interesting movie and definitely worth seeing. The ending is particularly well done.

The movie is also nicely 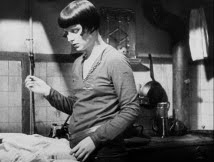 ambiguous – we sympathise with Lucienne’s desire to make something of her life but at the same time we see that her dream of being a movie star really is an escape into an unreal existence (which is emphasised by the ending), but then her short-lived attempt at conventional domestic life is portrayed as being equally unreal.

The Kino DVD release is just awful. Picture quality is bad, sound quality is bad, there are no extras. Although it’s a sound film the speed of the movie is all wrong, just like silent movies projected at the wrong speed where everyone is moving too fast.
Posted by dfordoom at 2:31 AM