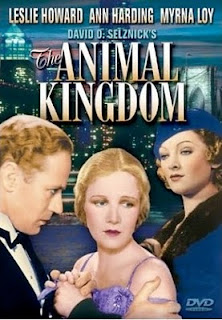 The Animal Kingdom is yet another overlooked pre-code gem that needs to be released on DVD (although it was released years ago on VHS).

Leslie Howard is a publisher, Tom Collier, who is about to be married to Cecilia (Myrna Loy). He’s been living with an artist, Daisy Sage (Ann Harding), but they had a free-and-easy relationship without any messy emotional entanglements. At least that’s what they both thought. And Cecilia knows all about Daisy, and she isn’t jealous at all. At least that’s what she thought.

This is very definitely a movie that could only have been made in the pre-code era. Not only is the cohabitation between Tom and Daisy referred to openly, they also discuss their sex life quite frankly. Tom is also prone to wistful reminiscences about his favourite brothel, the Florentine, where he evidently spent many enjoyable evenings in his youth. There’s also a degree of emotional honesty and an acknowledgement of the complexity of relationships and the difficulty of the choices that must be made that you don’t find in post-code movies. 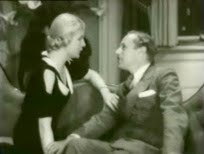 Leslie Howard is an actor I’ve generally been inclined to dismiss as being rather insipid. I’m starting to think I may have seriously misjudged him, that perhaps the secret is that he was one of those stars, like Norma Shearer and Greta Garbo, who could only bloom in the free atmosphere of pre-code Hollywood. His performance in The Animal Kingdom is simply superb, a masterpiece of understatement but at the same time a very powerful and honest performance. This is the kind of subtle role that seemed to bring out the best in him, playing a man who has always taken a slightly childish and passive approach to life but now finds he can no longer avoid the painful and awkward decision 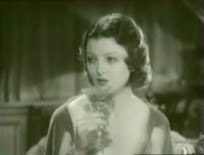 s that grownup people have to make. He’s a sensitive man who must make brutal choices.

Ann Harding’s acting style takes a bit of getting used to but it’s an effective performance. Myrna Loy makes the most of her opportunities, and another interesting feature of the film is that her character, who would usually be the “good girl” character, is portrayed as being somewhat sympathetic but also calculating and manipulative. And Loy carries it off splendidly.

This RKO production is also one of those pre-code movies that doesn’t lose its nerve. A terrific movie that deserves to be much better known, and an absolute must-see for all fans of pre-code movies.
Posted by dfordoom at 6:35 PM