Our Modern Maidens, released in 1929, was one of those transitional movies with a soundtrack featuring music, sound effects and some speech in the background, but no synchronised dialogue. It’s the tale of a group of flappers and the Jazz Age naughtiness they get up to, with Joan Crawford and Douglas Fairbanks Jr in the starring roles.

Crawford is Billie, and she’s in love with Gil (Fairbanks). Unfortunately her best friend Kentucky (yes, her name is Kentucky) is also in love with young Gil. Meanwhile Billie decides that Gil’s fledgling diplomatic career could use a boost, so she uses her feminine wiles on a powerful influential older man, Glen.

They might sound rather wicked, but these are just crazy mixed-up kids wanting to have a good time, and when Billie realises that the game of love is one in which people can actually get hurt she decides to do what she can to make amends. Being a pre-code movie, no-one gets punished for their little sexual escapades, and love eventually triumphs.

Silent movies were intended to be projected at a different speed from talkies, but the addition of a soundtrack meant that this one had to be run at the faster sound speed, thus pr 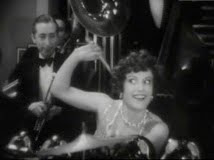 oducing that speeded-up jerky movement that so many people off associate with silent movies. Since the performances are somewhat hyperactive to begin with (Crawford especially is quite over-the-top) this speeded-up quality does become very noticeable.

This is a very lightweight movie, and is mostly worth seeing today for the gorgeous art deco sets (the MGM glitz is very much in evidence) and for the stunning costumes. Crawford, as usual in her MGM movies, gets to wear some wonderful gowns designed by Adrian, and it has to be said that he really knew 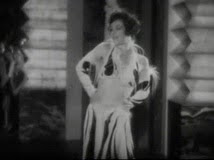 how to dress her. It also has some historical interest as a snapshot of the Jazz Age in full swing. Anita Page is completely adorable as Kentucky. Fairbanks Jr gets to do an amusing impersonation of his dad. Crawford (and it grieves me to say this since I’m a huge Joan Crawford fan) is not at her best in this film.

Still, it’s an amusing piece of fluff and entertaining enough in its way. If you love the 20s then it’s most definitely worth a look.
Posted by dfordoom at 4:48 PM