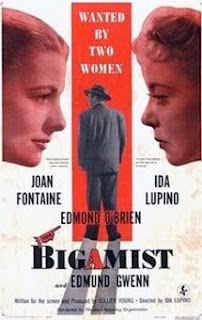 The Bigamist, released in 1953, was the last of the handful of movies Ida Lupino directed for The Filmakers, the production company she and her then-husband had set up. It’s a low-key little B melodrama that, despite the title, is not the slightest bit lurid. It’s a good example of the greatest virtue of the old-fashioned Hollywood B movie - the Production Code Administration was likely to let you get away with things you couldn’t get away with in an A picture, simply because B movies were perceived as movies that didn’t really matter all that much.

Edmond O’Brien is travelling salesman Harry Graham. He’s just a regular guy, living a fairly dull and uneventful life. He’s married to Eve (Joan Fontaine) but she’s unable to have children. He spends an enormous amount of time away from home on business, especially in Los Angeles. When she finally comes around to his idea of adopting a child all seems to be well until Mr Jordan (Edmund Gwenn) from the adoption agency informs them that their past will have to be rigorously investigated. In the course of this investigation Mr Jordan discovers Harry’s secret life. He has a second wife, and a child, in Los Angeles. How this came about is then revealed in a lengthy flashback.

Harry wasn’t the kind of guy who picked up women for casual sex when on business trips, nor did he make use of the services of ladies of the night. And that proved to be undoing. When the loneliness really started getting to him, he met a nice girl (Phyllis, played by Ida Lupino) and fell in love with her. He tried to convince himself that nothing was going to come of it, that it would just remain an innocent friendship, but on his birthday he and Phyllis ended up in bed. And she got pregnant. And being a decent guy, he did the right thing and married her. So he ended up with two households in two differe 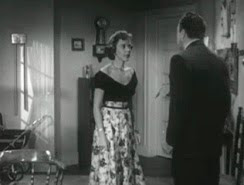 nt cities, with two different wives. Until the nosy Mr Jordan started poking around and Harry’s double life caught up with him.

It’s a movie that provokes surprisingly heated responses. I suspect that your reaction to this film will depend very much on how you feel about its refusal to take a moral stance. There are no villains. Phyllis isn’t “the other woman” - she knows nothing about Eve’s existence. She’s a very sympathetic character. Eve is troubled by her inability to have children and over-compensates by throwing herself into the business that she and Harry own, but she’s no monster. Harry is a decent guy who wants to make everybody happy. As the surprisingly non-moralistic courtroom speech by the judge at the end suggests in a covert sort of way (th 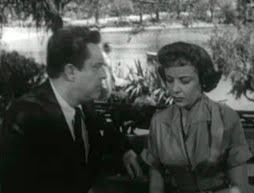 is was 1953), it’s a complex situation and perhaps having the state acting as moral policeman and treating this as a criminal matter isn’t helpful and only serves to make an unhappy state of affairs more unhappy.

Audiences at the time apparently didn’t approve of this non-judgmental attitude and the movie was not a commercial success. The ambiguous ending probably didn’t help the movie’s prospects in 1953. And many modern viewers also seem annoyed by the movie’s failure to take sides, and especially by the movie’s unwillingness to condemn Harry. Personally I think that’s its strength. These are essentially good people who find themselves caught in a predicament where there’s no easy way out. Someone is going to get hurt. 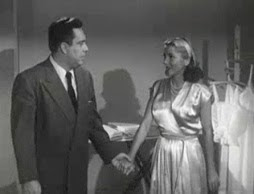 Lupino’s direction is unobtrusive. She’s content to let this be an actor’s picture, and given the high quality of the acting by O’Brien, Fontaine and Lupino herself this is a sound move. Lupino is particularly impressive, demonstrating her ability to give a subtle performance where it’s appropriate. The one real weakness is Edmund Gwenn as the annoying busybody Mr Jordan. Apart from not adopting a moralistic tone the movie is also notable for being rather frank about extra-marital sex, by the standards of 1953 anyway. It’s a fascinating and absorbing little movie that is well worth watching. And it’s public domain so it’s very easy to get hold of, or even to download.
Posted by dfordoom at 3:37 PM