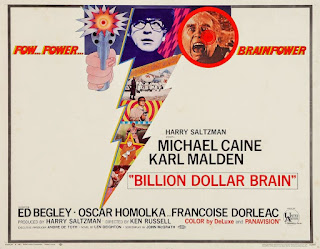 Billion Dollar Brain (1967) is a spy movie directed by Ken Russell, and that in itself is pretty interesting. Russell was a very successful TV director looking to break into movies and this seemed like the kind of obviously commercial property which would aid that project.

It’s also one of the Harry Palmer spy movies starring Michael Caine, based on Len Deighton’s unnamed spy novels, and that makes it even more interesting.

And it’s based on a particularly interesting Deighton novel. It’s rather more extravagantly plotted than the three earlier unnamed spy novels. Which is obviously why it appealed to Ken Russell. It would offer him the opportunity to show what he could do in the way of spectacular visuals.

Since it’s a Ken Russell movie (and even though in this case he was working as a director for hire he still gives the movie a certain Ken Russell flavour) it won’t surprise you to know that not everyone likes this movie. For some spy fans at the time it was a bit too over-the-top. And some Deighton fans thought it was too James Bondian and not Deighton-ish enough. In fact it’s nothing like the Bond films (which by the way I love).

But with Harry Saltzman producing and with Maurice Binder contributing the excellent opening titles I can see why some assumed this was going to be a very Bondian spy movie. In fact that may have been what the producers were hoping for. It does have Bond touches but it has its own distinctive flavour.

Former British spy Harry Palmer (Michael Caine) is now working as a private detective. He’s not doing too well, in fact he’s broke, but at least he’s not working for the government any more. He considers that to be a major plus. And he’s not working for Colonel Ross (Guy Doleman) any more, another plus.

But for some reason Colonel Ross wants him back. Harry isn’t interested.

Harry gets what seems to be a very simple job. All he has to do is deliver a package to Helsinki. The package is a thermos flask. Harry, being a former spy and having a suspicious mind, has the package x-rayed. It contains eggs. Odd. But two hundred pounds is two hundred pounds and Harry needs the money.

In Helsinki he discovers that Leo Newbigen (Karl Malden) is mixed up in all this. Newbigen was a CIA agent and is totally untrustworthy. If Newbigen is involved than it’s something murky. Harry also meets Newbigen’s hot young girlfriend Anya (Françoise Dorléac).

Newbigen is working for General Midwinter (Ed Begley), a crazy Texan billionaire who is conducting a personal crusade against communism.

Harry also runs into Colonel Stok (Oskar Homolka). Stok is a very senior KGB officer. He and Harry are old enemies, but they’re old friends as well. Harry likes Colonel Stok a lot more than he likes his own boss, Colonel Ross.

General Midwinter is totally insane (it’s a fine scenery-chewing performance by Ed Begley) and he’s dangerous. Colonel Stok wants Harry to stop him, and Harry is also inclined to think that stopping General Midwinter would be very good idea. He’s just not sure how to do it. He’s not sure what Leo Newbigen is likely to do and he’s a bit suspicious of Anya after she tries to kill him.

It builds to an extraordinary climax on the ice.

Michael Caine is, as always, perfect as Harry Palmer. Karl Malden is great as the rogue CIA agent. Françoise Dorléac, in her final film rôle before her tragic death, is very good. Vladek Sheybal, a wonderful character actor, is excellent as a mad scientist type working for Midwinter. Look out for Donald Sutherland and Susan George in small rôles.

I can understand why when the studio execs saw the finished film they anticipated problems promoting the movie in America. After all the Soviets are the good guys while General Midwinter’s anti-communist forces are unequivocally the bad guys, determined to start World War 3. I don’t think this is the movie the studio was expecting, which probably accounts for its lack of commercial success. And it was probably just too unconventional spy movie for 1967 audiences.

It’s a movie which is ripe for rediscovery but that’s never really happened. It’s great that Kino Lorber released it on Blu-Ray (and the Blu-Ray looks fabulous) but disappointing that there are no extras. It’s a movie that really needs an audio commentary to put into the context of the careers of both Ken Russell and Len Deighton.

Billion Dollar Brain is an eccentric wildly unconventional spy movie. It’s not in the gritty style of the earlier Harry Palmer movies and it’s not in the Bond style, but it’s also not quite a spy spoof. It’s quirky and original and fascinating, and entrancing once you get into the groove of it. Very highly recommended.