In the early 1930s Edgar G. Ulmer was rising fast until an affair with the wife of a producer ended his career as a director as far as all the top studios were concerned. He spent almost the whole of the rest of his career making very low-budget movies for outfits like PRC, the most poverty-stricken of the Poverty Row studio.

In the 1940s he did however get a couple of opportunities to make movies with reasonably generous budgets. One was The Strange Woman, which his childhood friend Hedy Lamarr hired him to direct. The second was Ruthless, in 1948.

And Ruthless really is a pretty lavish production. Ulmer had real money to play with, and plenty of it.

The parallels between Ruthless and Citizen Kane are obvious but shouldn't be pushed too far. 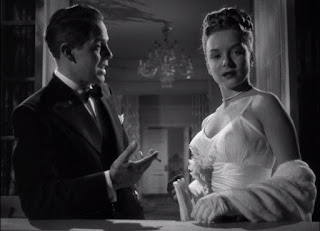 In 1948 Horace Woodruff Vendig (Zachary Scott) is a fabulously wealthy financier about to launch an ambitious foundation dedicated to achieving world peace. Is it another cynical move, perhaps an elaborate tax dodge, or is Vendig genuinely tying to do something decent for once? His childhood friend Vic Lambdin (Louis Hayward) isn’t sure. Vic has turned up at the launch with his new lady love, Mallory Flagg.

Vendig’s story is then told in flashback.

He had a pretty miserable childhood, with an irresponsible gambler father and an embittered mother who blamed the boy for all her troubles. Then young Horace Vendig got a lucky break. He was out canoeing with Vic and a little girl named Martha. Martha went overboard and almost drowned but Horace saved her. Martha’s parents were so grateful they more or less adopted Horace (which was possible since his mother was keen to get rid of him) and Martha’s dad paid for the lad to go to Harvard. One assumes that the point of the childhood flashback is to explain why Horace Wendig grows up believing that the only way to get what you want is to take it regardless of the consequences and without being constrained by any moral qualms.

The young Wendig also learns how to manipulate women. He and Vic both fall in Martha but there’s never any doubt that if Wendig wants her he’ll get her. Given the appalling way his mother treats him perhaps it’s not surprising that he treats women very badly. 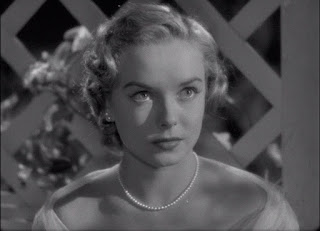 Wendig rises fast in the world of high finance. He tramples a lot of people on his way to the top. He’s clever and unscrupulous and willing to take risks but he also knows how to make use of women in order to destroy men who get in his way.

Wendig approaches relationships with women the way he approaches business. He takes what he wants and when the women is no longer useful to him he discards her, in the same way he would dispose of an unprofitable shareholding. He uses the glamorous Susan Duane (Martha Vickers) as his entreé into New York high society. He uses Christa, the wife of financier Buck Mansfield, as a weapon against her husband.

Vic remains loyal to his boyhood friend for years, refusing to admit to himself that Wendig is a monster. In fact Vic can never quite shake the belief that maybe there’s some good in Wendig.

Alvah Bessie, who co-wrote the screenplay, was a communist and I think it’s fair to say that the screenplay was intended to be a highly political attack on capitalism. I get the impression that Ulmer wasn’t interested in overt political themes and the movie is more of a case study of greed and the lust for power. Mercifully we don’t get a single political speech. 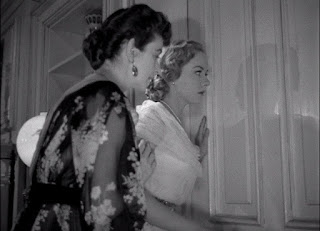 Like The Strange Woman this movie is sometimes mislabelled as film noir. It isn’t film noir at all.

Louis Hayward as Vic is very impressive in what was a rather tricky role. Vic spends years refusing to face the truth about Wendig but somehow Hayward has to convince us that Vic isn’t a fool. He also has to be careful not to allow Vic to come across as a prig. Hayward succeeds on both counts.

Sydney Greenstreet is fine as Mansfield, a very sharp ruthless operator who discovers to his cost that Wendig is just a little bit sharper and more ruthless. Martha Vickers as Susan, Lucille Bremer as Christa and Diana Lynn (in a dual role as Martha and Mallory) are all good. Raymond Burr is fun in a small part as Wendig’s dad.

It is however Zachary Scott’s movie. It’s a bravura performance but there is some subtlety to it. Wendig is almost a conscienceless monster but perhaps not quite. There are moments when he sees himself clearly and isn’t sure he likes what he sees. That doesn’t mean that he acts on these twinges of conscience. He represses them and he seems able to do so very successfully. 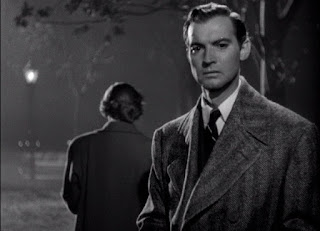 When he finally gets to the top of the heap does he suddenly realise that the pursuit of money has left him an empty shell as a human being? Does he suddenly feel the need to make amends, or to seek redemption? That would be a conventional Hollywood approach but one of the things that makes Ruthless such an interesting movie is that Wendig remains an enigma. Is his peace foundation a genuine attempt at redemption? Was inviting all the people he’d trampled to the launch an indication that he felt real remorse about the way he’d treated them? These things are left rather ambiguous. Personally I feel he’s as monstrous as ever and that he’s just added a couple of layers of hypocrisy and self-glorification but others might interpret the ending very differently.

The actual ending comes as a surprise which I won’t spoil. Whether you think it works or not is up to you.

Olive Films released this movie as a barebones Blu-Ray and the transfer is very very good indeed.

Edgar G. Ulmer could make great movies on budgets of almost nothing. Ruthless demonstrates that with a generous budget he could make movies as polished as anyone in Hollywood. Highly recommended.
I watched this movie after reading the fine review at Riding the High Country.
Posted by dfordoom at 4:14 PM