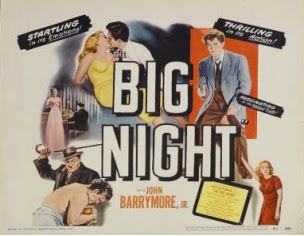 The Big Night was one of Joseph Losey’s last films in Hollywood before he relocated to England. And it’s one of no less three Losey films released in 1951. Unfortunately it’s far from being a classic.

It’s usually described as a film noir but really it’s a borderline case. It’s more of a coming-of-age movie.

A teenaged boy witnesses his father getting a savage beating at the hands of famed sports columnist Al Judge. He is disturbed not just by the brutality of the beating but also by his father’s unwillingness to offer any resistance. Being a dumb teenager he doesn’t bother to find out what was behind the attack. He merely steals his father’s gun and sets off to get revenge. 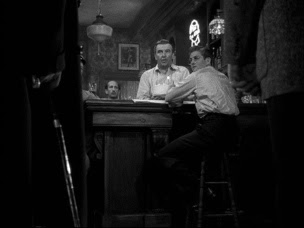 Just before the assault on his father we had seen the son (George La Main, played by John Drew Barrymore) being taunted by other teenagers. The reactions of various adults to the beating are curious and suggest that the father (Andy La Main, played by Preston Foster) is perhaps regarded as the sort of man who would not fight back. The boy’s determination to exact revenge may therefore be motivated by a concern about perception of both his and his father’s manhood or lack thereof. One suspects a bit of a Freudian influence on the script here.

George sets out for the fights, hoping to find Al Judge. He encounters an amiable drunk, Dr Lloyd Cooper. He’s not a medical doctor but a teacher of journalism. George meets Cooper’s girlfriend Julie and later meets Julie’s sister Marion (Joan Lorring). Young George (we’re presumably expected to believe he’s around 16 or 17 although Barrymore was 19 when the film was made) is attracted to Marion. It’s the whole teenaged boy falling for sophisticated older woman thing. 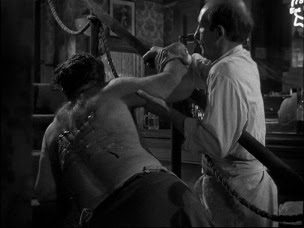 George does eventually track down Al Judge, only to discover that the situation was not at all what he thought it was and that Judge had his reasons for administering the beating (and Andy had his reasons for not resisting). The meeting does not go well, as you’d expect when you have an impulsive distraught teenager running around with a gun.

The ending brings both tragedy and understanding. The biggest problem I had with this movie was that it seemed very stagey.Stanley Ellin and Losey co-wrote the screenplay, based on a novel by Ellin. The screenplay is very very talky and not terribly convincing.

Some fairly bad acting performances don’t help. John Drew Barrymore, billed here as John Barrymore Jr, was the son of the great John Barrymore (and the father of Drew Barrymore) but his career was undistinguished and it’s not hard to see why. I wasn’t impressed by Preston Foster either but it could be argued the script didn’t give him much of a chance. 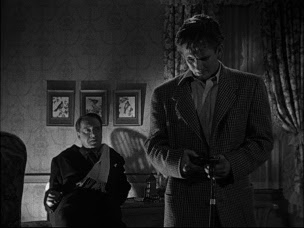 Coming-of-age movies have about the same appeal for me as social message movies - in other words no appeal at all. If you enjoy these sorts of movies you might be more forgiving of this movie.

It must seem like I’m conducting a vendetta against Joseph Losey after not liking The Prowler either. I do like Losey’s 1960s British movies a great deal but his early American noir films just don’t do it for me. The Australian DVD release is an all-region PAL disc without any extras. Picture quality is acceptable.
Posted by dfordoom at 12:28 PM