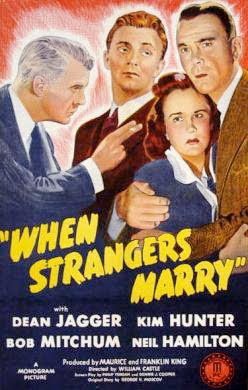 In the 50s William Castle would become one of the great B-movie showmen, his low-budget horror films benefitting from his genius for publicity and his extraordinary talent for coming up with gimmicks. Before that he’d directed the usual quotas of B-movies, including the highly regarded 1944 film noir When Strangers Marry.

The second lead in this picture was a young actor called Bob Mitchum. By the time it was re-released in the early 50s (under the less relevant but unquestionably more noir title Betrayed) Robert Mitchum was a huge star and he was hastily promoted to top billing.

It starts with a murder in a Philadelphia hotel. A man has been boasting that he is carrying $10,000 on him and he pays the price for his folly. He is found strangled with a silk stocking.

The scene then switches to New York where we’re introduced to a young woman named Mildred Baxter (Kim Hunter) who has just married, and it’s been the proverbial whirlwind romance. She knows he’s a salesman but she doesn’t even know the name of the company he works for. After one day of marriage he left on a business trip and she hasn’t seen him since. Now, a month later, she receives a cable from him in Philadelphia informing her that he will meet her at the Sherwin Hotel in New York.

He doesn’t show up, but as luck would have it she runs into an old friend (in fact an old flame), Fred Graham (Robert Mitchum). He’s very supportive and suggests she should go to the police and he even persuades Lieutenant Blake of the Homicide Squad to give the matter his personal attention. You might be wondering why a homicide cop would be interested in a routine missing persons case but Blake does in fact have his reasons, and those reasons are connected with the murder case in Philadelphia.

Mildred does eventually find her husband Paul (Dean Jagger) but he seems nervous and secretive. Mildred starts to suspect that something is very wrong, and that it may have something to do with Philadelphia. Then Paul announces he has to leave again, but this time it’s no business trip.

The plot will keep you guessing for about 30 seconds. This is definitely a minor noir B-movie (it was released by Monogram) and it’s not as good as its reputation would suggest. Still, it does have some atmospheric noirish moments and it has a solid cast.

Mitchum seems a little tentative. He would of course improve very rapidly but this is not one of his more memorable roles. Kim Hunter is fine and her character is the emotional centre of the movie. Dean Jagger was always pretty reliable and delivers an excellent performance. Neil Hamilton (best known as Commissioner Gordon in the 1960s Batman TV series) makes a good homicide cop. He’s a decent guy and a good cop.

Considering the deficiencies of the screenplay Castle has made a reasonably entertaining and fast-moving noir thriller and it’s interesting to see Robert Mitchum at a time when he was still learning the ropes and his film persona was not yet solidified. Just don’t expect too much.

The Warner Archive made-on-demand DVD-R is of perfectly acceptable quality.
Posted by dfordoom at 2:16 PM