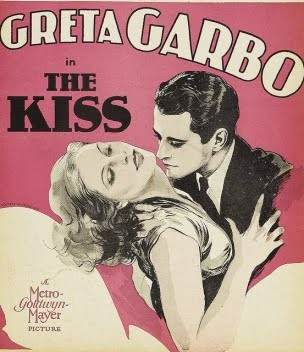 The Kiss was Greta Garbo’s final silent movie. Actually it’s a hybrid, since it has a soundtrack that includes music and sound effects, but no dialogue.

For some reason MGM had convinced themselves that they were going to have a problem with Garbo’s voice in talking pictures. In fact of course her voice turned out to be an asset - not only did she have a fine speaking voice but she had an accent that was exotic and sexy and that complemented her onscreen image perfectly.

The Kiss was helmed by Jacques Feyder, who would go on to direct her first talking picture, Anna Christie. It’s a romantic melodrama and it’s a classic Garbo picture - she plays a woman for whom love is everything.

Irene Guarry (Garbo) is married to a middle-aged industrialist, Charles Guarry. She’s been having an affair with André Dubail (Conrad Nagel) but the lovers have decided they must break it off.

Irene has also attracted the attention of Pierre Lassalle, the 18-year-old son of a friend and business partner of her husband’s. Irene considers him to be a mere boy but she is reluctant to hurt him and assumes that he will soon get over his infatuation. He’s a harmless young man and his belief that he is in love with her is the sort of thing that boys of his age do. She is after all a very beautiful and very sophisticated older woman, and he’s lucky enough to have chosen a woman who is willing to humour him while taking care to ensure he doesn’t get hurt.

Unfortunately her calculations are upset when a harmless incident is misinterpreted. She has agreed to give young Pierre a photograph of herself and when he calls at her house she allows him to kiss her. This is the fateful kiss of the movie’s title, fateful because at that exact moment her husband arrives home and flies into a jealous rage. The upshot of this is that her husband ends up dead, the victim of a gunshot wound.

Irene is accused of murder and stands trial. But what really happened at her home on that fatal night?

Lew Ayres, soon to become a major star, plays the naïve but well-meaning Pierre Lassalle. Conrad Nagel is Irene’s lover, André. Both give performances that are effective and, by the standards of silent movies, restrained and lacking in the exaggerated qualities that so many people find off-putting in silent cinema. Garbo of course was always naturalistic in her performances. The understated acting makes this a good movie for anyone new to the attractions of silent film.

There are some nice art deco-influenced interiors. William H. Daniels became more or less Garbo’s personal cinematographer, working on no less than twenty-one of her films. He always knew exactly how to photograph her and she always trusted him implicitly. It was one of the great partnerships between a cinematographer and a star and it’s one of the strengths of this movie.

The Warner Archive DVD-R look reasonably good but it appears to be the same severely truncated print that has been shown on TCM. It runs for just 62 minutes whereas the original film (according to the IMDb) ran for 89 minutes, and it feels like a movie that has been savagely cut. One assumes however that this is the only cut of the movie that has survived. It’s not a great print by any mean but it’s watchable.

This is one of Garbo’s more overlooked movies and it’s well worth a look.
Posted by dfordoom at 12:15 PM