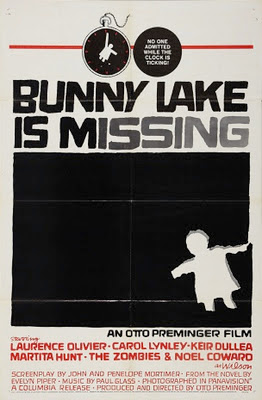 Otto Preminger’s movies of the 60s are a rather varied bunch. He was starting to take major risks and do offbeat movies and Bunny Lake Is Missing certainly qualifies as offbeat.

It was made in England in 1965, with Preminger as usual producing and directing and with a script by John and Penelope Mortimer. It was shot in Cinemascope and black-and-white, a slightly odd choice for a film by a major director in the mid-60s but it suits the oddball nature of the movie.

It starts out appearing to be a fairly straightforward police procedural about a missing child. It doesn’t take very long for the first subtle signs of oddness to appear and then it keeps getting stranger until finally it becomes quite bizarre.

Ann Lake (Carol Lynley) is a young American woman who has just arrived in London from the US. She’s enrolled her daughter Bunny in a nursery school. The school is a little disorganised on that day owing to the fact that the headmistress is away and Elvira (Anna Massey) has been left in charge and is just barely coping. Ann leaves Bunny in the charge of the school’s cook for a few minutes while she tries to locate her teacher, and then has to rush off to let the removalists into her new flat. When she returns to the school Bunny is nowhere to be found.

Ann is of course rather upset and immediately phones her husband Steven (Keir Dullea). At least we assume from the way they behave that he’s her husband but later we discover that he is actually her brother. The police are called and Superintendent Newhouse (Laurence Olivier) takes charge of the investigation.

The curious thing is that nobody at the school can recall seeing Bunny at all. The school has no record of her enrolment. Nobody anywhere has seen her, and the audience hasn’t seen her either. Superintendent Newhouse is clearly puzzled by this case.

I’m not going to reveal any more of the plot, but there are many twists and turns to come and some of these twists are very strange indeed.

Preminger’s style of directing avoids gimmickry. He favoured long takes and liked to take the time to allow characters to develop and to gradually reveal their inner natures. This approach works extremely well here, forming a nice understated contrast to the steadily growing weirdness of the story. The movie is always visually impressive (as were all of Preminger’s movies) but without being intrusive or distracting.

Carol Lynley has had a very long career but never quite achieved the breakthrough to major stardom. Keir Dullea’s career followed a similar pattern. They’re both reasonably effective in this film. Laurence Olivier does not chew a single piece if scenery in this movie, an amazing feat of self-restraint. His subdued performance works well since it doesn’t distract us from the things we should be watching whilst still managing to make Newhouse a believable and interesting figure.

Adding his own touch of oddness to the proceedings is Noël Coward as Ann’s eccentric alcoholic and lecherous landlord. And even more oddness is provided by Martita Hunt as Ada Ford, one of the founders of the school and now retired and somewhat mad and still living at the school. Anna Massey is also excellent, as always. There’s also Finlay Currie as the proprietor of a very creepy doll’s hospital.

This is a movie that often threatens to run off the rails but Preminger manages to hold it all together even as the weirdness grows and grows. A fascinating off-kilter masterpiece and
highly recommended.

Columbia’s Region 2 DVD is barebones but looks stunning.
Posted by dfordoom at 3:03 PM