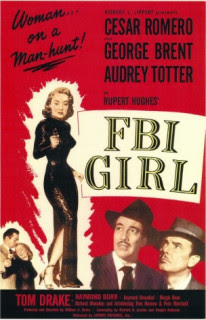 FBI Girl, a Lippert Pictures production from 1951, is really more of a low-budget police procedural than a film noir although it does have some affinities with vaguely noirish movies like The Naked City and Call Northside 777.

Crooked governor Owen Grisby (played by Raymond Greenleaf) is actually a man wanted for murder, a murder committed years earlier. Now a senate crime commission is about to pay a visit (from the governor’s point of view a very unwelcome visit) to Capitol City. The governor’s only chance would be if someone could get access to the FBI’s fingerprint files and remove his fingerprint file. The governor’s crooked chief advisor and henchman Blake (Raymond Burr) believes that may be possible. If one of the women employed in the FBI fingerprint section could just be persuaded to do it, or blackmailed into it.

He has found such a woman but Blake makes an error of judgment. He intends to kill the woman afterwards, so there won’t be any loose ends, but she is killed by his over-enthusiastic goons before handing over the file. 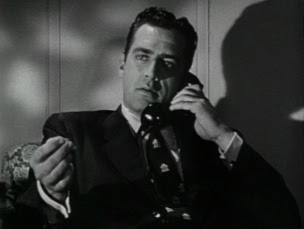 The FBI of course are not complete fools. They soon realise this was murder, and the murder of someone in their fingerprint section naturally excites their suspicions. Two veteran agents are assigned to the case, Agent Glen Stedman (Cesar Romero) and Agent Jeff Donley (George Brent).

The two agents are convinced the murder was connected to the woman’s enployment in the fingerprint section and they even know the name of the man whose fingerprints are involved - John  Williams (Governor Grisby’s real name). Unfortunately the FBI has 10,000  John Williams on file and nothing else to go on so that’s not much help. 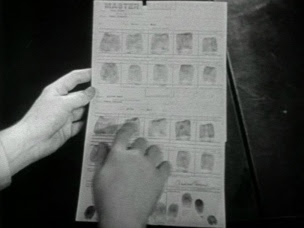 The agents know another attempt will be made and they’ve got as far as tracing a link back to Capital City. But to nail the bad guys they’ll need help. They think they’ve found that help in the person of Shirley Wayne (Audrey Totter). She works in the fingerprint section and her boyfriend has approached her to steal the John Wiliams fingerprint file. This could be the break Agents Stedman and Donley need. But it will be dangerous work for Shirley.

The movie builds to a thrilling and very effective climax. Will the agents get their man, and most importantly will Shirley escape with her life with Raymond Burr gunning for her? For a Robert Lippert production this one boasts a pretty good cast. Audrey Totter is at least  a minor noir icon while Raymond Burr is a very major noir icon. Totter is solid enough but as you’d expect the picture belongs to Raymond Burr. This guy oozes menace and evilness from every pore and he’s in fine form. Cesar Romero is good and while George Brent’s career was on a downhill slide at the time (that’s why he ended up in several Lippert pictures) he was a decent actor and he gives a good account of himself.

Despite it’s low budget this doesn’t have too much of a cheapjack feel. Director William Berke (who also produced the movie) had a reputation for churning out cheap movies on time and on budget and although his approach to directing is kind of basic (don’t expect too many artistic flourishes) he certainly gets the job done and he maintains a brisk pace (helped by the taut 74-minute running time) and he knows how to build the tension without resorting to anything fancy. This film is included in VCI’s Forgotten Noir DVD boxed set and it’s a very acceptable transfer indeed for what is a relatively obscure low-budget B-movie. And there’s even a commentary track. Some of the movies in the Forgotten Noir set are at best borderline noir but if you love crime B-movies it’s a very worthwhile purchase, and the price is certainly right.

On the whole this is a much better movie than you might expect. There’s something here for police procedural fans and something for fans of gritty crime flicks with a fair amount of action towards the end. If you’re a Raymond Burr fan you want this movie. Warmly recommended for any aficionado of crime B-pictures.
Posted by dfordoom at 3:33 PM