Song of Songs was one of the first times Marlene Dietrich acted for someone other than Josef von Sternberg, leading the actress to make the anguished comment, “Jo, why hast thou forsaken me?” In Song of Songs she was directed by the very competent Rouben Mamoulian, but he was no Josef von Sternberg and the results indicate that Dietrich was right to be upset.

In this 1933 Paramount production Dietrich plays an innocent country girl (yes, really) named Lily who is sent to live with her aunt Mrs Rasmussen in the big city after her father’s death. The aunt runs a bookstore and Lily is soon put to work there but, unbeknownst to the aunt, she soon finds herself a second job as an artist’s model. Lily is at first not entirely sure about the idea of posing nude but sculptor Richard Waldow (Brian Aherne) assures her it’s all in the name of art so Lily figures it must be OK.

Lily’s great passion is the Bible, especially the Song of Solomon, a passion she inherited from her father. It’s all about love, a subject on which Lily’s views are a trifle hazy. But she knows love is a good thing, a spiritual thing. 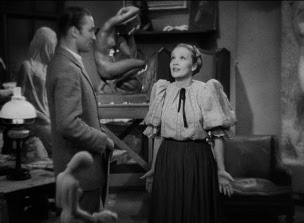 The aunt is not well pleased with the idea of her niece being a nude model but she soon senses an opportunity. The wicked and lecherous Baron von Merzbach (Lionel Atwill in full-on moustache-twirling melodrama villain mode) will pay Mrs Rasmussen generously if Mrs Rasmussen will encourage Lily to look fondly on his attentions.

The Baron is a great patron of the arts but he appears to be mostly interested in nudes, and his interest is perhaps not quite as artistic as he would like people to believe. Richard is now hard at work on a sculpture of Lily that he hopes will make his reputation, and Lily and Richard fall in love. Lily is an old-fashioned girl and her ideas on love tend to involve marriage while Richard’s ideas are somewhat more carnal. The sculpture has already been bought by the Baron, but the Baron wants to own more than just the naked Lily in marble. He wants to add the teal thing to his collection. He offers to take Lily off Richard’s hands. He will marry her and turn her into a lady of accomplishments. Lily, feeling betrayed by Richard, is willing to marry the Baron. The Baron doesn’t mind that he has bought Lily’s love, but for Lily love should be something more.

The marriage is, predictably, unsuccessful and Lily takes to a life of pleasure. But still she dreams of true love. 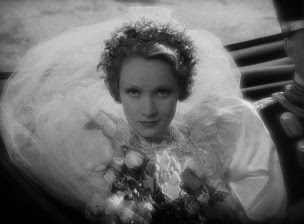 Dietrich is not entirely convincing as the innocent country girl but as her character suffers through love betrayed her performance becomes steadily more sure-footed. Dietrich is certainly charming as the naïve Lily and Mamoulian seems just as obsessed by her beauty as was von Sternberg but while von Sternberg was a true visionary Mamoulian was merely a very capable studio director and the poetry of the von Sternberg-Dietrich collaborations is missing. Dietrich seems less in control but she still manages to convince us that when she strips for Richard it is for her something pure and artistic and yes, even spiritual.

Brian Aherne is competent while Lionel Atwill overacts outrageously but it’s the sort of performance that worked in pre-code Hollywood cinema. 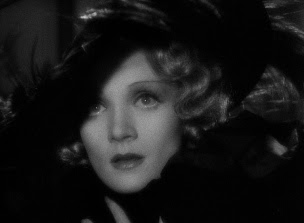 Like so many pre-code features this one is a mixture of prudery and naughtiness, of morality play and peepshow. It’s by no means a complete success and it’s probably best not to take it too seriously. It’s always worth watching Marlene Dietrich of course. Worth a look if you’re a serious Dietrich fan but don’t expect the magic of the von Sternberg-Dietrich films.

Universal’s Region 2 DVD is a reasonably impressive transfer although noticeably lacking in extras.