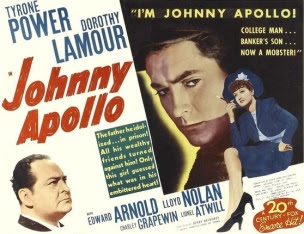 Johnny Apollo is an interesting 1940 proto-noir from 20th Century-Fox. The American film noir style had not yet emerged fully formed but a number of the key elements are already present in this movie.

Robert Cain Jr (Tyrone Power) is a rich college kid whose whole world collapses when his millionaire stockbroker father (played by Edward Arnold) is imprisoned for embezzlement. What hurts him most of all is that his father is guilty. Now he has nothing to believe in. And his father’s high-priced lawyer (played by Lionel Atwill) can’t even arrange for his dad to get early parole. 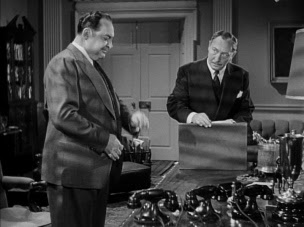 The son decides to engage the same crooked lawyer who was able to get early release for mobster Mickey Dwyer (Lloyd Nolan). A chance meeting at this lawyer’s office with Flynn’s girlfriend Lucky (Dorothy Lamour) will have momentous consequences. Soon Robert Cain Jr has been transformed into gangster Johnny Apollo and is working for Mickey Dwyer. He figures that if he can’t believe in anything any more, and can’t get a decent job because of his father’s tarnished reputation then he might as well become a criminal as well. And Johnny and Lucky fall in love.

His father, Robert Cain Sr, has become a model prisoner and despite being a convicted criminal himself he has developed a strong moral conscience and disapproves of his son’s new career choice. Meanwhile Johnny’s career as a mobster is thriving but trouble is looming and it soon arrives - both Mickey Dwyer and Johnny are indicted by a grand jury. 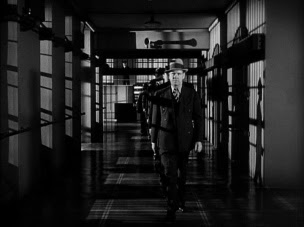 Mickey has a plan and he wants Johnny to be in on it but if Johnny agrees he will have burnt his final bridge and will never be escape the life of crime. And Lucky couldn’t stand that. She knows that deep down Johnny is a decent guy and she loves him so she comes up with her own plan to save him. Johnny’s dad, now a reformed character, also has a plan to save his son. But both Lucky and Robert Cain Sr will be putting their lives on the line.

Johnny Apollo is a noir hero in the sense that he’s never really evil. He chooses a criminal career as a way of saving his father. The underrated Tyrone Power gives a solid performance while Lloyd Nolan has great fun as a mobster. 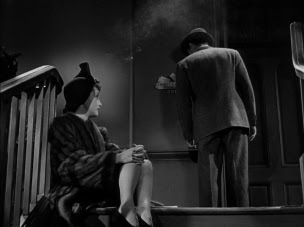 Arthur C. Miller’s cinematography is impressive but it’s not really noir. The noir elements of this film are mostly in the content - the decent guy dragged into the noir underworld and the atmosphere of official corruption. Director Henry Hathaway would go on to make several genuine noirs. 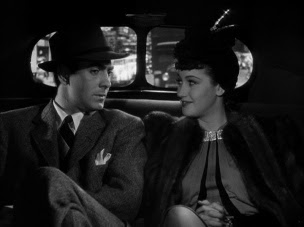 Bounty’s Region 4 DVD is without any extras but it’s a good transfer.

Johnny Apollo might not be pure noir but it’s certainly a pointer towards the emerging noir style, although mixed with elements of the classic gangster movie. Recommended.
Posted by dfordoom at 11:17 PM