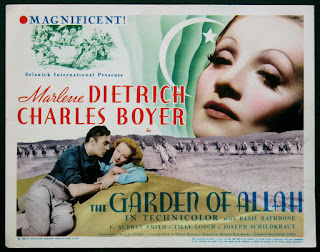 Dietrich is Domini Enfilden, a convent-educated girl in Africa who yearns to see the desert. She meets Boris Androvsky (Charles Boyer), a monk who has fled his Trappist monastery. He had been happy in the monastery where his job was to make the liqueur for which the monastery was famous. The secret of this liqueur had been passed down from one brother to another and now that he has fled he has taken the secret with him. There will be no more Lagardine liqueur. 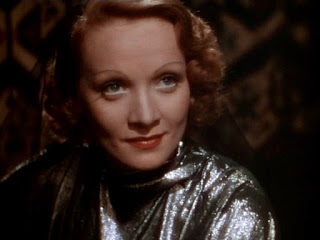 Boris had been tempted by the thought of the life outside, and mostly by the thought of women. Domini and Boris fall in love and marry and journey off into the desert to live happily ever after. Well, not quite.

Boris is haunted by guilt for breaking his vows. He has never really lost his faith and is torn between that faith and his love for Domini. His past will of course catch to him and he will face a terrible choice.

Boris is really the central character but Dietrich, being Dietrich, still manages to dominate the movie with her extraordinary screen presence. While it’s true that she misses the guiding hand of Joseph von Sternberg (this film was directed by Richard Boleslawski) she still has that Dietrich magic. And she looks as beautiful in colour as she did in black-and-white. 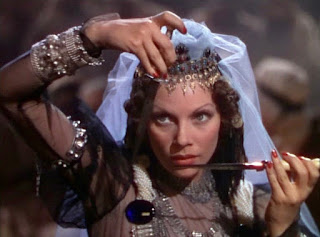 Charles Boyer is good and does his best with a demanding role but he is overshadowed by Dietrich and by Basil Rathbone who plays a mysterious Italian count with an interest in Domini, and plays the role with his customary dash.

C. Aubrey Smith gives a typical C. Aubrey Smith performance as a kindly priest who disapproves of Boris’s actions but can’t help having a good deal of sympathy for the unfortunate lovers and in his own way he hopes that both will find some kind of happiness and fulfillment.

And overshadowing all the characters is the desert itself, a place that brings them face-to-face with their deepest anxieties and longings. 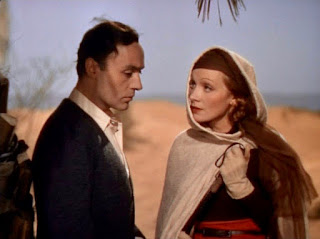 The cinematography is truly breath-taking. This was a David O. Selznick production and it’s as lush and sumptuous as you’d expect from a Selznick picture. Selznick is a somewhat misunderstood man, perhaps too ambitious for his own good and with an unfortunate tendency to sabotage his own movies through his perfectionist tendencies and constant interference and his insistence on trying to get a movie to conform to his own vision, but he did have a vision and despite some failures his contribution to American cinema was considerable.

This is a movie about faith and it approaches the subject seriously and with sensitivity. Movies about faith are nowadays profoundly out of fashion and some modern audiences may find this concern with faith, and with the sanctity of vows (vows that Domini takes as seriously as does Boris), puzzling and alienating. That’s unfortunate because unless you can accept that this concern really does matter to the characters you may have difficulty appreciating the film. 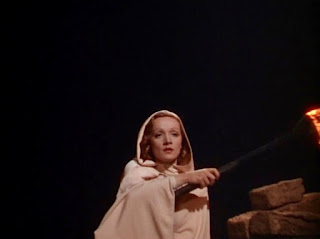 The movie can of course be viewed as merely a love story (and it is a love story) but really it’s more than that and it succeeds fairly well in achieving its aims.

My advice would be to give this very underrated movie a chance. If nothing else it’s a visual feast and it’s a chance to see Marlene Dietrich in a very sympathetic role. Not a movie for everybody perhaps but I still recommend it.

The Region 2 DVD from PT Video is magnificent, preserving all the qualities of the superb Technicolor cinematography.
Posted by dfordoom at 5:45 PM