Captain from Castile was one of 20th Century-Fox’s swashbuckling adventure movies starring Tyrone Power, and this one is on an epic scale.

Directed by Henry King in 1947 it is set against the background of Hernando Cortes’s conquest of Mexico in the early 16th century.

Pedro de Vargas (Tyrone Power) is a Spanish caballero whose family falls foul of the Inquisition, and in particular of the malevolence of the sadistic Diego de Silva (John Sutton). His young sister is tortured to death and he only escapes thanks to the help of a beautiful peasant girl named Catana (Jean Peters) and a recently acquired friend named Juan Garcia (Lee J. Cobb). Juan is a slightly mysterious figure, an adventurer recently returned from the New World. He persuades Diego that that is where his future lies. Juan, Diego and Catana all arrive in Cuba and eagerly sign up for Cortes’s expedition. Diego proves himself a capable officer but his past catches up with him in an unexpected fashion. Meanwhile the expedition proceeds through Mexico, driven by the lust for gold.

This lust for gold will prove too much of a temptation for some members of the expedition. They attempt to make off with the jewels that have been offered by emissaries of the Emperor Moctezuma. To ensure that such temptations no longer present themselves Cortes burns his entire fleet. The expedition will now continue, to either glory or death. Tyrone Power as usual proves himself adept in this kind of role. John Sutton makes a particularly chilling villain while Lee J. Cobb is surprisingly successful as the rogueish and larger-than-life Juan Garcia. Jean Peters makes a fine heroic leading lady. All three of these characters have no future in the Old World and see the New World as not just an escape but an opportunity to make a new life, a life much better than the ones they are leaving behind.

Cesar Romero’s performance as Cortes is interesting. Cortes himself is a controversial historical character and Romero plays him as charismatic, obsessed, ruthless but also strangely human and even at times sentimental. He plays him as the sort of man that other men would follow, regardless of the risks, which of course he was. 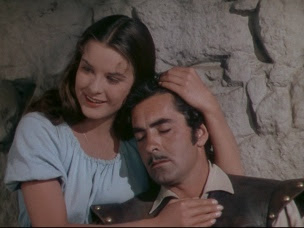 The movie adopts an even-handed attitude towards the expedition of Cortes. It makes no bones about the cynicism and opportunism of Cortes or the injustice of his plans to steal an empire, but also stresses the heroism and daring of Cortes and his followers, and their desire to carve out a new world.

The movie was shot in Technicolor and looks magnificent. 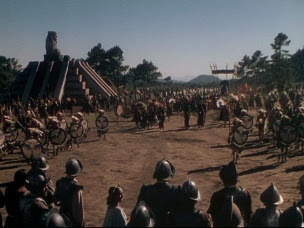 The Region 4 DVD from Bounty lacks extras but makes up for this with a very fine transfer.

An exciting and surprisingly morally complex adventure film, and highly recommended.
Posted by dfordoom at 6:34 PM