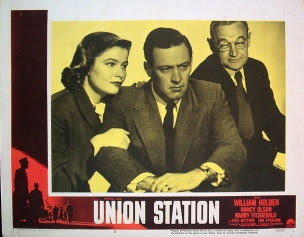 Union Station’s claims to noir status rest almost entirely on its style, but if style counts for anything then this movie, and especially the exciting climactic sequences, should certainly be noir enough for most people’s tastes.

Made by Paramount in 1950, as far as content is concerned it’s essentially a police procedural with thriller elements as well.

In feel it’s classic city noir. Although much of the action takes place (as the title suggests) in Union Station in Los Angeles it could be any railway station in any city of the US. The actually setting is, as it is in any good urban film noir, Noir City USA.

The story begins when a passenger on a train notices some suspicious behaviour by some  fellow passengers. She reports the matter, and thus is Lieutenant Bill Calhoun (William Holden) introduced into the story. He’s a railway cop, he’s a cop through and through, and he takes his job seriously. This report probably means nothing but he follows it up. In fact it’s far from being nothing - he has stumbled into a major kidnapping case. 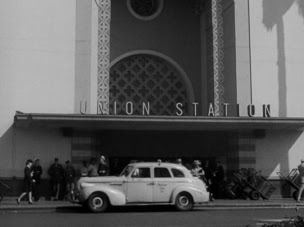 The kidnapping victim is a blind girl. Her wealthy father receives a ransom demand for $100,000. A case as big as this will obviously involve more than just the railway police, and now Inspector Donnelly (Barry Fitzgerald) enters the action. Although belonging to different generations both the young Calhoun and the veteran Donnelly are professionals and right from the start they work together smoothly as a team. Since the ransom pickup is to be made in Union Station Donnelly recognises that he will need Calhoun’s knowledge of the workings of the station.

Joyce Willecombe (Nancy Olson), the woman who made the initial report, will be involved in the ongoing investigation as well - her ability to recognise several members of the kidnapping gang is  one of the few good leads the cop have at this stage. 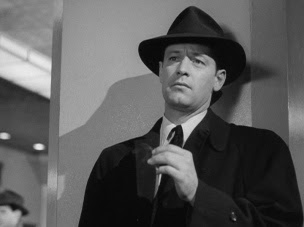 Kidnapping is always a uniquely unpleasant crime but it’s made even more so by the fact the the victim is blind and the head of the gang is a particularly ruthless psychopath, Joe Beacom (Lyle Bettger). Donnelly and Calhoun know that the odds are that even if the ransom is paid the victim will be killed. In fact for all they know she may already be dead, but they have to act on the assumption that she’s alive and will remain so at least until the ransom is paid. The victim’s father clings to the belief that his daughter is still alive.

With someone like Joe Beacom involved the case can be just as hazardous for the other members of the gang as it is for the victim. He’s not a man who likes to leave loose ends lying around and his usual method dealing with such loose ends is fatally violent. 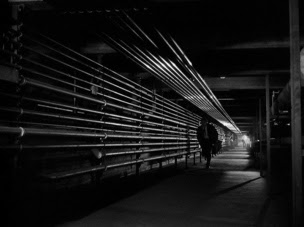 The screenplay by Sydney Boehm doesn’t try to be too clever. The plot is a basic one and the quality of the movie depends on how well it’s executed. And in this case it’s executed very well indeed. With a man like Rudolph Maté in the director’s chair, a man who earned five Oscar nominations as a cinematographer, you’d expect the movie to look good and it does. The cinematographer on the film was Daniel L. Fapp and between them he and Maté have achieved the perfect noir visual signature for this film.

Barry Fitzgerald had played sensitive cops numerous times by this stage of his career and his performance is assured and sympathetic. He works well with William Holden who turns in a very solid performance as a hardboiled but dedicated cop. Jan Sterling goes close to stealing the movie as Beacom’s girlfriend. She thinks she’s as hardboiled as he is, but even she doesn’t know what a vicious piece of work he is. Lyle Bettger makes a splendid noir psychopathic villain. 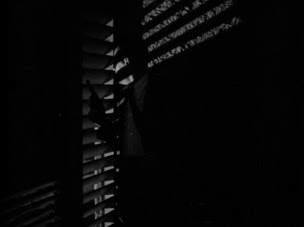 The DVD from Olive Films offers no extras but an excellent transfer. This is a very neglected and very professionally done hardboiled noirish crime thriller and we can be thankful to Olive Films for making it available to us in the DVD format.

Paramount productions tended to have high production values and this movie, even though it was not a major A picture, still benefits from the studio’s classy style which it combines very well with some excellent noir touches and the result is the sort of excellent mid-range movie that the studio system was so good at delivering. Railroad settings are always effective backdrops for thrillers and this movie is highly recommended.
Posted by dfordoom at 7:14 PM