Thank You, Mr. Moto was the second of 20th Century-Fox’s Mr Moto films. Released in 1937, it was directed by Norman Foster, as were most of the movies in this series, and of course starred Peter Lorre.

This time the Japanese-born agent of the International Police, Mr Moto, is on the track of the tomb of Genghis Khan (and the fabulous treasure it is rumoured to contain). And not surprisingly so are certain other people, people with few moral scruples. The key to finding the tomb is a series of seven 13th century Chinese scroll paintings. The Chung family owns six of the scrolls, but all seven are needed in order to reveal the location of the tomb. Prince Chung does not want anyone to find the tomb and desecrate it, but Mr Moto has been ordered to find it.

A young American woman in Peking, Eleanor Joyce (Jayne Regan), finds herself caught up in the search for the scrolls as well. Her father is a collector of Chinese antiquities with a particular fondness for Chinese scroll paintings. He knows nothing of the legend that these particular seven paintings contain a secret meaning, and Eleanor’s interest in the paintings is purely aesthetic. 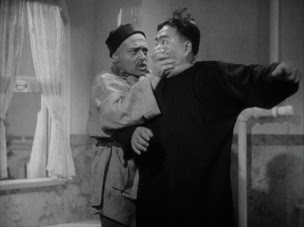 Colonel Tchernov’s interest in the paintings is far from aesthetic. He is prepared to kill to get them, in fact he is prepared to kill Prince Chung, but Mr Moto intervenes. Despite their very different agendas Mr Moto and Prince Chung respect each other and both are men to whom honour is all-important and Mr Moto will find himself facing an ethical dilemma as a result.

Eleanor has attracted the romantic attentions of a young American diplomat, Tom Nelson (Thomas Beck). Both Eleanor and Tom will find themselves in great danger as the unscrupulous gang in pursuit of Genghis Khan’s treasure lay their perfidious plots. Peter Lorre had well and truly settled into the role by now and he’s clearly enjoying himself. Mr Moto is not a man who relies entirely on brainpower to resolve his cases - he’s quite capable of playing the action hero as well, and Lorre faces this challenge with considerable elan. Lorre was keen to take on this role which gave him the chance to be both a hero and a very likeable character as well, a welcome change of pace for the actor who was starting to get stereotyped in sinister roles. Mr Moto is a man of great charm and Lorre brings a surprising warmth to his performance, as well as sly humour.

The supporting cast is quite acceptable by B-movie standards. John Carradine is amusing as a crooked dealer in Chinese antiquities. Norman Foster handles his directing task with a far amount of dash - this movie moves along at a pleasingly brisk pace. One of the great strengths of the studio system was the capability of the studios to make B-movies with fairly high production values and Thank You, Mr. Moto never looks shoddy.

There’s a nice mix of action and suspense and the movie is thankfully free of the unnecessary comic relief that was unfortunately such a feature of 1930s and 1940s crime B-movies. This film is one of four included in the first of the two Mr Moto DVD boxed sets issued by Fox. The transfers are excellent and the movies include a few extras as well. These might have been relatively low-budget movies but they’re given a respectful treatment in this boxed set.

Thank You, Mr. Moto is terrific B-movie fun, a fine crime movie with a hint of international intrigue, and is highly recommended.
Posted by dfordoom at 11:25 PM