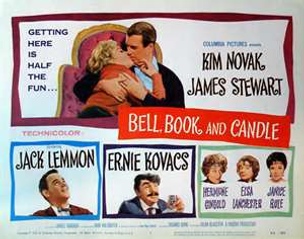 Bell, Book and Candle is a breezy 1958 romantic comedy about witches in modern New York City.

James Stewart is publisher Shep Henderson. He’s about to be married, that is until he meets his neighbour downstairs. Gillian (Kim Novak) runs a shop specialising in primitive art. Shep thinks she’s a bit flaky but what he doesn’t know is that she’s a witch. Gillian takes one look at Shep and decides he’s the man for her. The fact that he’s going to be married the next day is a minor detail that can easily be taken care of. She is after all a witch. She casts a spell on him to make him fall in love with her.

Needless to say Shep’s wedding is soon called off and he’s hopelessly in love with Gillian. 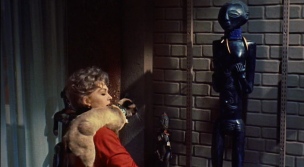 Gillian’s brother Nicky (Jack Lemmon) is also a witch. That causes problems when Shep is persuaded to publish a book on Magic in Manhattan. Sidney Redlitch (Ernie Kovacs) is a crazy drunken author who’s just written a bestseller called Magic in Mexico. Sidney knows there are lots of witches in Manhattan but he doesn’t really know anything about the city’s thriving witch subculture. That’s where Nicky steps in, offering to co-author Sidney’s new book. Nicky figures he’ll make a lot of money out of it but unfortunately he tells Sidney a little bit too much about the witch subculture.

Meanwhile Gillian is feeling guilty about snaring Shep by witchcraft because she’s started to fall genuinely in love with him. And everyone knows what happens when a witch falls in love - she loses her powers. But Gillian doesn’t care and she’s determined to tell Shep the truth about herself. Of course he doesn’t believe her but after spending some time with Nicky and with Gillian’s dotty middle-aged witch friend Bianca (Hermione Gingold) he realises it’s all true. Now Gillian is about to lose Shep. 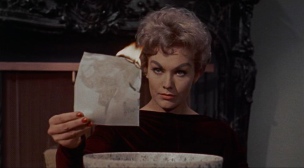 There are the usual romantic comedy complications, with a few new supernatural twists. Shep has broken with Gillian but he can’t get her out of his head. The truth is that his attraction for her is no longer witchcraft - he’s really in love with her. Gillian’s familiar Pyewacket (a Siamese cat) is disgusted by the whole proceeding and decides to move out. Pyewacket likes his life as a witch’s familiar and he’s not interested in staying around if Gillian is going to do daft things like fall in love with a mortal. He’s moving in with Bianca.

Gillian and her friends might be witches, but they’re harmless good-natured witches (except perhaps for Nicky but even he is chaotic and meddlesome rather than malevolent). These are modern witches and they just want to be left alone with their congenial little subculture. The tone is strictly light-hearted. 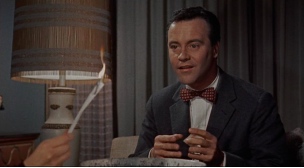 Jimmy Stewart is in full-on Jimmy Stewart mode, thoroughly likeable and at his ease. Jack Lemmon, one of my least favourite actors, has ruined many a movie but he can’t ruin this one and at times it’s almost possible to even enjoy his performance. The big surprise is Kim Novak. She’s an absolute delight. She’s obviously having a ball and she makes a perfect modern-day witch - slightly exotic, quite sexy, and generally adorable.

Director Richard Quine keeps things bubbling along very nicely. This is the sort of movie that probably didn’t really need to be made in widescreen and Technicolor but with the great James Wong Howe as cinematographer it all looks glorious and no-one is likely to complain. 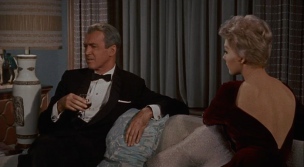 Bell, Book and Candle is pure fun and is certain to please even the most jaded of romantic comedy fans. Highly recommended and a must-see for one of Kim Novak’s finest performances.
Posted by dfordoom at 3:09 PM